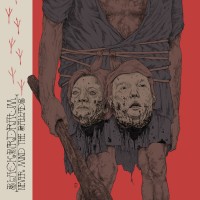 Blackbird Raum have followed up to their 2015 full-length Destroying, with a five-track EP titled Nevermind The Ballads, which came out on October 1, 2016. For the most part they continue to do what they do best on this EP, which is record incredibly emotional and dark sounding anarcho folk punk. If you arenâ€™t familiar with the band just know that when they are classified as â€œfolk punkâ€ it isnâ€™t an acoustic guitar or two that are the foundations of their songs. Instead the band is made up of traditional folk instruments like mandolin, accordion, upright bass, washboard, violin etc. and all of the members take part in singing.

The first track â€œDivisionâ€ is classic Blackbird Raum in that the vocalists sing this urgent sounding melody over the acoustic instruments that are being played at a fairly fast pace, while a slow accordion chord progression is blended in the background. The title track is also around the same tempo as â€œDivision,â€ but instead of a few a vocalists singing lead Zach Religious shouts the lyrics until the whole band joins in to sing, â€œFighting for power!/Like they know not the hour!â€

Of the five tracks on this release two are a little more on the abstract side of the musical spectrum. â€œShoutingâ€ is literally twenty-two seconds of speaking and yes, shouting over each other saying totally different things. And â€œPaul Woodsâ€™sâ€ is a soulful solo instrumental piece done completely by one violinist.

Nevermind The Ballads is a solid effort by Blackbird Raum. They continue to be one of the few bands that strive to be as different as possible in their genre and punk in general and they definitely succeed. For those havenâ€™t gotten into band yet, I highly recommend checking out Destroying first (the track â€œLast Legsâ€ was covered by Leftover Crack on Constructs Of The State and both versions are phenomenal) and then giving this release a shot.