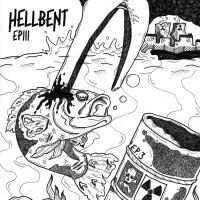 Hellbent are a new hardcore band from the Toronto area that appeared on my radar recently. I find their most recent EP release to be unique in that they mash together a combination of rock and roll/southern rock mixed with hardcore. The band sort of gives me a Bars or The Hope Conspiracy vibe with a more modern hard style influence. It is not the typical metallic hard style or extra raw punk style I see many young bands trying out recently.

EPIII is short and heavy, and the main vocalist has a solid bark for this style. The gruff vocals stand alone and do not get lost in the mix, which is nice. The lyrics seem to skewer certain social and political issues, the song â€œHarambeâ€ appears to voice a frustration with the current state of internet culture. The song seems a bit more like a soapbox than a stand alone song, but Hellbent pull it off better than some.

Whether you agree or disagree with the bands political stance, it takes guts to throw opinions around these days, especially for a young band. I tend to avoid politically driven music, but Hellbent definitely show potential. EPIII was a quick and reasonably entertaining listen, and I would definitely comeback to check out a future LP.Â