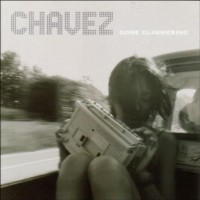 Chavez are an indie rock back from New York who formed in 1993 and released two independent albums on Matador. Their music incorporates elements of Post-Hardcore, Indie, and Math-Rock. Gone Glimmering was released in 1995 and went largely unnoticed in the mainstream, with the exception of the band having a music video show up on Beavis and Butthead at one point and the occasional gushing review.

Taking cues from cult bands like Slint and Mission of Burma, Chavez tore through the underground college scene of the late 90â€™s and established a loyal following and garnered word-of-mouth for their live shows and recorded material. At times you could find the band playing gigs with the likes of Sonic Youth, Bardo Pond, and Guided by Voices. Itâ€™s just a shame they didnâ€™t get more recognitionâ€¦

Gone Glimmering is indie rock forced through a hardcore feeling. The musicianship is quite good with angular riffs and dynamic shifts that tread on the dramatic level. Think of perhaps Fugazi or Unwound spliced with a bit of Quicksand and Superchunk. Yeah thatâ€™s a lot of material to gloss over, but Chavez really did shine in the thick of all those amazing talents.

Opening track â€œNailed to the Blank Spotâ€ starts things up with screeching guitars that can remind the listener of how awesome heavy indie rock can be that straddles the metal edge. Helmet did it, Handsome did it, Orange 9mm did it, and Chavez did it as well. This is really good stuff and the rest of the album doesnâ€™t let up too much except on certain songs like â€œLaugh Trackâ€ and â€œThe Ghost by The Seaâ€ where that Post-Hardcore style dips a bit into that good olâ€™ 90â€™s emo tinge.

But of course donâ€™t let all those dynamics fool you! The album continues its plunge into indie rock depths with other notable tracks like â€œPentagram Ringâ€ with its more poppy side reminiscent of Pavement and â€œWakemanâ€™s Airâ€ which reminded me a bit of Shudder to Think.

Nine tracks accompany this album and thatâ€™s enough. Thereâ€™s enough bite to get through a half hour of your day and Gone Glimmering is worth a listen just to help you get around to filling out all those empty spots in your musical journey. Give Chavez a listen why donâ€™t ya?