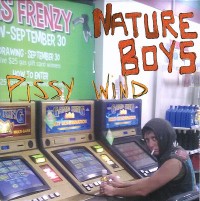 Kansas City's Danny Fischer (guitar/vox) and Suzanne Hogan (bass/vox) have been making music as Nature Boys for the last six or seven years, touring Europe and the US as well as releasing two LPs and a single along the way.Â  For this, their most recent release, they enlisted Alex Moss (formerly of Der Todesking, as well as others) to handle the drums, and it does a lot to elevate the musical interplay between the band.Â  At this point they have really refined their aesthetic; they play fast, frenetic, punk rock with dual vocals and little sprays of almost surf-esque reverb wriggling up to contribute to their overall peripatetic, sweaty feeling.Â  Think Nervosas meet Radioactivity.Â  And speaking of the latter, Nature Boys traveled down to Denton to record this single at Cool Devices and Jeff and Mark did a fantastic job of making sure that everything is up front and mastered perfectly without losing the grit that Nature Boys bring to the table.Â

The A-Side "Pissy Wind" is a song detailing the frustrations of those folks who combine the two odious traits of negativity and beingÂ in love with their own voices.Â  Danny and Suzanne practically yelp out the lyrics as if they're trying to shout over someone pissing and moaning at them beforeÂ giving up at the end of each verse and letting Danny's guitar shriek out as if conveying the overall futility of arguing with peopleÂ who converse like this.Â

The B-Side "CoastÂ to Coast" starts with some really nice higher register work fromÂ Suzanne complementing Alex's tom fills building up the song to a frantic couple of measures before settling into a more angular, mid tempo stomp.Â  TheÂ lyricsÂ tell of watching friends get older and drift ("I heard your ghost last night coming through/Coast to coast/Never standing still") without finding something to hold onto, forever chasing another high.Â  Danny's guitar work on this song is excellent, turning to snaking guitar lines that play off the rhythm section beautifully, exemplifying the lost, rootless feeling of waking up after the party is over.Â It's clear that Nature Boys are still progressing musically and just writing great songs.