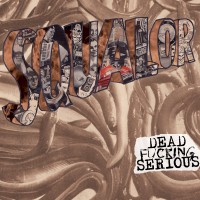 Iâ€™m going to start this with a big old disclaimer: if you are not into screaming and yelling in your music, this album is not for you. Ignore how many stars it has and just stop reading. Chances are high that you wonâ€™t find this album appealing.

That being said, I kinda felt that way at one time, too. Like a lot of people, I left this type of 80s hardcore back, wellâ€¦ in the 80s. But what Dead Fucking Serious has put together on their first full-length album, Squalor, has made me rethink my decades-long decision to essentially discount an entire genre of punk rock because â€œI canâ€™t be bothered with the yelling.â€

To call Squalor a full-length is being a bit cute. In true 80s hardcore fashion, the album is sixteen songs topping out at twenty minutes total. A majority of the tracks are simply brutal aural assaults coming in at/around the one-minute mark. A few songs towards the back end of the album break out of the mould in one way or another and stir up the smash-and-grab style of the truly hardcore tracks.

The first nine on the album are straight up hardcore done right. Taking up only nine minutes of the entire run-time, they are brutal, they are fast, and they areâ€¦ well furious (but without the cars). Phenomenally played drums, a growling bass that is more heard than felt (a nod to the poor recording techniques of yesteryear?), and guitars which are layered when needed all provide a backdrop to Sam Wartenbeeâ€™s permanently angry and frustrated voice, hoarse with emotion he yells his way through most of these tracks. DFS also employs a bevy of crowd-supported group shouts throughout the entire album, which work well a majority of the time. About halfway through they can get repetitive until they are used on songs that one would, normally, not expect them on.

Once we hit the tenth song, things calm downâ€¦ a little. â€œBlank Checkâ€ begins with a roiling bass line soon followed by drums, and then guitars joining in shortly. The first truly mid-tempo song on the album, the vocals are less screamy, but now sound torn to hell in an overtly emotional manner. This is the first song where Sam seems to make an effort at what would be called â€˜singing,â€™ and his shredded voice works so well on it. I first thought of this track was as simply filler but, after multiple listens, has come out as one of my faves on the entire album. Two tracks later, â€œSave Your Breathâ€ starts out mild and builds into another thrashing hardcore sound, but plays on a bit more melodic, with the group shouts making possibly their strongest effect.

On the final lap, DFS throws us for a huuuuge loop. The penultimate track â€œSomething Moreâ€ shows the vocals at their nearest to what could be considered â€˜legitimateâ€™ singing, hoarse and worn out, not exuberantly aggressive but, still angry. It is also an almost completely melodic song front to back. For some reason, it struck me as so out of place, yet so well done, that I immediately assumed for no reason that it was a cover song because it sounded so familiar and hit me right to the core. Turns out that, no, it is an original track. Truly another standout on the album, if only to further prove that DFS is not a one-trick pony.Â  Rounding out the fun is â€œControl,â€ as the longest track, it clocks in at just a hair over two minutes. This mid-tempo song still hits upon all of the bases covered before- a worthy send-off for this brief encounter.

Throughout the album drummer Kellen Holt is on spot with his percussion. What may seem like the common, sloppy speed drumming of hardcore punk is actually incredibly precise in his hands. Justin Ryan, joining the band on bass, lays down a solid foundation, which, if not entirely unique, is still more than enough to lift the music to greater heights. Sam's guitars are solid and his voice, well, we've covered that already.

So now we come down to it. Why did I give this album four stars? Well, I vacillated between 3.5 and 4 for a long-time, and was leaning towards the lower-end, if only because this style of music is definitely not in the wheelhouse of a lot of people. Yet, after a solid 10-15 listens, maybe Iâ€™ve inherited the same disenchantment of the system that DFS has? Or maybe I just decided that I like this album a lot more than I expected to, and that narrow, decades-old genre which it belongs to shouldnâ€™t keep it from getting the score it deserves.

Coliseum/Doomriders: Not of this World [7-inch]