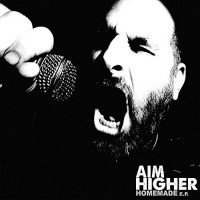 Aim Higher is a new project from Kevin Seconds of 7 Seconds fame. Musically it sounds very similar to 7 Seconds. As a matter of fact, if you had told me these songs were outtakes from the excellent 2014 LP Leave A Light On I would have no reason not to believe you. It actually makes me wonder why these songs didn't end up on a new 7 Seconds record. Anyway, Aim Higher is good in its own right. Homemade is four fast blasts of melodic hardcore with Kevinâ€™s familiar voice as the focal point. Like 7 Seconds, Aim Higherâ€™s messages are mostly positive. That seems to be the one factor that unites all of Kevinâ€™s music, from his raging punk to his more sensitive singer-songwriter stuff.

Homemade opens with the poignant, accusatory â€œStain On Your Generationâ€. â€œFor a Reasonâ€ is much more celebratory as it recognizes friendship and unity in the scene. The title track is also an upbeat reminder of punkâ€™s DIY spirit. Closer â€œMouth of a Strangerâ€ is the longest and most interesting song on the EP. Its music is vintage Ramones and its rich harmonies nearly resemble The Beatles. Not surprisingly, it wraps things up on positive note. All four songs are really good. The downside? The total running time is less than four and a half minutes. From what Iâ€™ve read, Homemade promises to be a teaser for an Aim Higher LP in 2017. If thatâ€™s the case, I would certainly look forward to hearing it. Or better yet, how about a new 7 Seconds record?

Coliseum/Doomriders: Not of this World [7-inch]