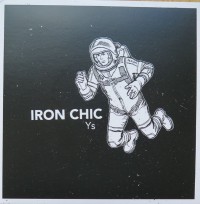 Yâ€™s came out a little while ago, in 2015 to be exact, but I was surprised to see that it had fallen through the reviewer cracks. This could be due to various reasons; it is only a 3 song EP after all. Regardless of when Yâ€™s came out, it features two of my favorite Iron Chic songs, as well as a Dead Kennedys cover.

I enjoy the majority of Iron Chicâ€™s catalogue of releases, and Yâ€™s is no different. The two original songs are two of the bands most dynamic songs to date. Both original tracks from this EP have a mid-tempo and heart-felt vibe to them. It is difficult to pick which song is the stronger out of the two originals. The song â€œYâ€™sâ€ is catchy and anthem like. The lyrics touching on points of growth and maturity in a more adult, or forgive me for the reference, dad sense. The lyrics themselves are poetic and impressive, and this song stacks up with the best of the past Iron Chic songs.

â€œThe Dreaming and the Waking Worldâ€ is no slouch of a song either. This track is an impressive and dynamic slow-burner. The song is catchy with great harmonies and guitar work. The lyrics revolve around depression and struggle, which come off as legitimately genuine. This is an awesome and somewhat dark punk rock song. Both of the original tracks on Yâ€™s play off of each other beautifully, packing a lasting punch.

Finally, we have the cover â€œDog Biteâ€ by the Dead Kennedys. It sounds like what you would typically expect â€“ and that is Iron Chic covering a Dead Kennedys song. The pick up of the tempo adds some diversity to the track listing, and the song is a nice touch to the EP, but the two original songs are the real shining moments here.

For those who may have missed Yâ€™s, I strongly recommend giving it a listen. It is a little more downbeat than some other Iron Chic material, but it is a rewarding listen nonetheless.Â

Off With Their Heads: Wonâ€™t Be Missed