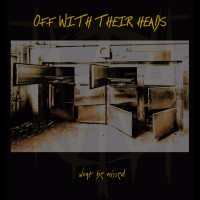 Acoustic albums from a punk band or solo artist are typically â€œhit or miss.â€ A lot of the time they just don't really compare to the bandâ€™s electric-based records. Of course there are exceptions. For example Chuck Ragan of Hot Water Music has put out some really great acoustic solo albums like Covering Ground. A lot of the time artists fail to distinguish their acoustic songs from others, which granted can be tough to do when it is just one person singing and playing the chords alone. But when it comes to Off With Their Headsâ€™ acoustic record Wonâ€™t Be Missed this is definitely not the case and they, like Chuck Ragan, are one of the exceptions of punk artists that have written a great acoustic record.

Instead of writing brand new songs for Wonâ€™t Be Missed Off With Their Heads picked a pretty wide-ranging variety of tracks from their catalogue and translated them from full band to an acoustic duo. The raw emotional intensity that OWTH is known for was not lost in that translation at all. Sure acoustic guitars donâ€™t exactly have the same effect electric ones do, but Ryan Youngâ€™s vocals through out the album are arguably more intense on these versions than the originals and more than make up for the absent distortion. When Ryan yells â€œGod dammit Iâ€™m falling a partâ€ during â€œClear The Airâ€ you can really feel his anger and frustration. And keep in mind that the songs on Wonâ€™t Be Missed don't just consist of vocals and guitars. The band took the time to add some other instruments in that are not found on the original versions. â€œClear The Airâ€ has some very heavy piano accents in it, a tambourine can be heard during â€œGo On Git Nowâ€ and some there is pretty gloomy slide guitar in â€œStolen Away.â€