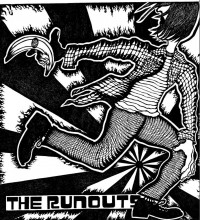 Pet Noises by The Runouts (not to be confused with the meat puppets album by the same name), is a perfect embodiment of everything I love about punk rock. On the surface, their influences seem fairly easy to pin down, yet upon trying to name a single artist that they take after for the entire record, that facade begins to crumble. The era Pet Noises takes after, however, is very clear: this is textbook 90s melodic skatepunk. From the infectious basslines, to the solid hooks, every one track here sounds like it was pulled straight from one of the early Punk-O-Rama compilationsâ€¦ and Iâ€™m a real sucker for that.

This album doesnâ€™t fall back on the usual gimmicks though (The Runouts donâ€™t pull out a d-beat until the closer), but rather strong songwriting and catchy melodies. I guess my biggest problem with this project is that at times it can seem be too familiar. The opener reminds me of that Off With Their Headsâ€™ "Home (Start Walking)," the chorus on "The Bucket" sounds like something that could have come off of Propaghandiâ€™s Less Talk,More Rock, and Feculent Creatures is very reminiscent of some of the more melodic moments from Pears with a layered vocal break during bridge thatâ€™s straight from the old school blink-182 playbook. None of this is meant to call out any of these these cuts as ripoffs (they very clearly arenâ€™t) of the aforementioned tracks, but rather a warning that, if youâ€™ve listened to your fair share of skate punk, this record makes the mind frantically search for connections and similarities.

But, in the end, I think thatâ€™s also what I like most about this record. The Runouts were able to take the best their influences had to offer, and boil that down to one very solid project. If youâ€™re a fan of NoFX, The Copyrights, Bouncing Souls, Bigwig, Teenage Bottlerocket, or any of the other Epifat bands, donâ€™t miss this. Pet Noises seems is a time capsule buried in 1996, and itâ€™s still a great listen 20 years later.

Off With Their Heads: Wonâ€™t Be Missed