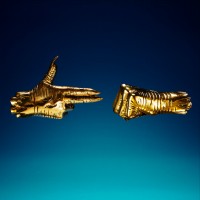 â€œWe dropped a classic today!â€ Killer Mike exclaims on the third track of Run the Jewels 3. On Christmas Eve 2016, Run the Jewels, the collaborative hip-hip project between Mike and El-P, surprise released their new album weeks ahead of schedule, once again for free. What a way to end the year!

Or, alternatively, RTJ3 and its theme of rebellion may very well be the soundtrack to 2017. Itâ€™s aggressive and political, demanding you take action but appreciate your blessings. The back-to-back-to-back punch of â€œDonâ€™t Get Captured,â€ â€œThieves! (Screamed the Ghost)â€ and album highlight â€œ2100â€ are calls to arms against the man, the system, et al. And itâ€™d be hard not to drink the Kool-Aid. Theyâ€™re smart and motivated. Theyâ€™re aggressive, using their microphone to shine a light on a broken government, no matter whoâ€™s in power. RTJ3 is clearly a reaction to the turbulent political climate that was 2016. Killer Mike spent time on the campaign trail with Bernie Sanders and plenty of his reflection shows itself. RTJ are more fed up now and know that things could get much rougher in the coming year.

RTJ3 continues the groupâ€™s hot streak. These two men, both of whom found real success from this collaboration in their mid thirties, are out for blood. El-Pâ€™s production is menacing, inciting action. Tracks like the ominous opener â€œDownâ€ and eerie, if not ironic â€œEverybody Stay Calmâ€ show range and both MCsâ€™ ability to flow over various styles. Because they love fucking rapping. They reek of confidence but not the kind that constantly needs an ego stroke. Killer Mike and El-P smile and dance circles around your favorite lyricists. Theyâ€™re all substance in plain black tees. At this point the two know each otherâ€™s strengths so well they can leap frog each other with ease. As rappers and collaborators, their dynamic remains untouched and their circle of confidants, small. Verbal real estate holds value. Whether reining weirdo Danny Brown or the always-welcomed Zach de la Rocha, the two bring likeminded rebels into their battalion not just to show off but for purpose. Their presence is both felt and appreciated.

No matter what this year has in store for us,Â Run the Jewels 3 will likely end up as one of the years best statements. While a ridiculous claim to make in January, itâ€™s hard to think of anyone else with the weight and insight these two carry. They lend themselves to the â€˜us vs. themâ€™ mentality and are always recruiting followers. This isnâ€™t simply a rap album. Itâ€™s a political album. Itâ€™s an educated album. Itâ€™s a creative hodgepodge of beats, ideas, and idealisms. And most of all, right now, itâ€™s an important album.