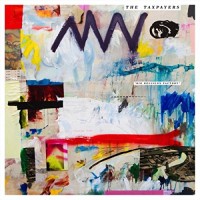 The new Taxpayers project has to have won the award for most overlooked LP of 2016. The Taxpayers are a moderately well known act within the punk community and have already proven their song writing proficiency in instant classics like God Forgive These Bastards, yet nobody seemed to be talking about this new album. The main criticism I see for The Taxpayers is that they’re guilty of being “too artsy”. That notion is definitely aided by the first track, “Viable Bitrate, Binary on Nothing”, which is more than a minute of croaky vocals sung over a sample of what I can only assume is a drill bit. It get’s pretty obnoxious pretty fast and I don’t blame anyone for ditching the project altogether at this point.

But after the final drill bit sample fades out, Big Delusion Factory really picks up, and I would go as far as to say it’s pretty accessible. The first real track, “Call Me Linda” is an incredibly strong opener with lyrics that are self deprecating on the surface, but which reflect some of that depreciation onto the system that the vocalist’s self criticized qualities are born out of. These lyrical themes reappear towards the end of Big Delusion Factory as the album closes out with “some worker in denim keeps calling me Linda. I sign all his papers, but that’s not my name. I pocket his money and then walk away”. While I honestly have no idea what significance is held in the name Linda, it does bring a nice sense of closure to the project and comes to a beautiful full circle. The chord progression used in “Call Me Linda” continues into the next cut, “Easy Money” which simultaneously compliments and provides a nice contrast in energy and instrumentation to “Call Me Linda”.

From there, Big Delusion Factory becomes a full on rollercoaster of an album. Every twist and turn provides a new idea which the band spontaneously drifts in and out of. Big Delusion Factory shows The Taxpayers playing with hints of folk, jazz, blues, punk, and whatever else the band sees fit to include at any given moment. Aside from the opening track, the only complaint I have about this new Taxpayers LP is that, for the most part, these aren’t tracks I can see myself coming back to a whole lot individually. Big Delusion Factory seems to be intended to be heard all the way through, as I think what I found myself enjoying about it most was the sonic versatility from track to track which isn’t evident through each track individually. I could definitely make exceptions to this statement with cuts like “Invaders”, but while I do love that song, there isn’t much that makes it stand out without the context of the full record.

If you slept on this project, or heard the first track and decided it wasn’t for you, I urge you to give Big Delusion Factory a chance.

Wren, Like the Bird: Uncertain Transitions: The Brief Life of THEY/THEM