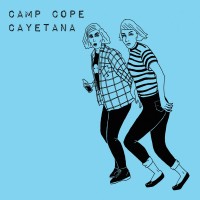 Since the invention of the split EP, I sincerely doubt that there have ever been two bands so perfectly paired together as Cayetana and Camp Cope. Both are female fronted acts that combine delicately beautiful indie rock melodies with a stripped down punk style and Replacements-style jangly guitars. Even the rhythms and nuances of their frontwomen’s singing styles are strikingly familiar, aside from their accents, as Cayetana is from Philadelphia, whereas Camp Cope hails from Melbourne, Australia. Instead of being formatted like a traditional split, with one band doing side A and another doing side B, the split alternates between the two bands, giving us a Camp Cope song, followed by a Cayetana song, followed by another Camp Cope tune, and finishing with another Cayetana song. The unique format highlights the similarities between the two bands from opposite sides of the globe, as the songs seamlessly flow into each other.

Camp Cope opens the album with the song that was released early as a single, “Keep Growing,” and it’s pretty obvious why this was the song they wanted to highlight. It’s hard to believe that someone could put so much emotion into singing a chorus about growing her hair out, but Georgia Maq pulls it off somehow. “Keep Growing” is probably the best track on the EP, and that’s coming from a girl who’s a much bigger fan of Cayetana than of Camp Cope. But, really, every song on this EP is absolutely fantastic. Cayetana’s best entry is the closing track, “Trails,” which starts off slowly and builds up to a swirling crescendo like an Appleseed Cast song. If you listen to the whole album from start to finish, it’s a beautifully emotional journey, and “Trails” is a truly cathartic way to close the whole thing out.

When I think of the albums I’m looking forward to this year, they’re pretty much all from female fronted bands: the new Dollyrots album, the Bombpops’ debut LP, and murmurings that the Cayetana tracks off of this split are previews of a new Cayetana LP coming in 2017. I’m getting the idea that this year is going to be a good one for punk bands with female singers, and this Cayetana/Camp Cope split gives us the first preview of the great things to come.