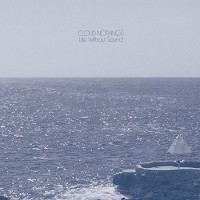 Cloud Nothings have never done things conventionally. Here And Nowhere Else was a great example of this a few years ago, where it felt like they were one step ahead of their peers on the indie rock scene. A faster, tighter and more frenetic Japandroids -- the best description I could give to someone after listening to that album. Life Without Sound, however, finds the band with a more expansive sound that's louder, more balanced, even faster and edgier than before. It's got their typical indie flair but what makes it pop even more are the shades of post-rock, post-hardcore, grunge and other influences sticking out like daggers all over the record.

The first couple tracks are the guitar-driven ones, aggressive and sharp, that jump out immediately at you. "Up To The Surface", with tones of sludge-rock at the end, and "Things Are Right With You" don't feel like common territory, yet sound like what the band was always naturally inclined to. Seamless, to say the least. As for that Japandroids comparison, look no further than "Internal World" and "Sight Unseen." Melodic, rasping jams that are filled with so much rhythm and attitude. What I love most is how John Goodmanson's production feels as polished as per his Death Cab For Cutie, Sleater-Kinney and Ceremony work, but with the character and identity that frontman Dylan Baldi worked so hard to carve out with his bandmates.

Cloud Nothings have never felt as fresh as this, which is a big thing to say, because they've always had a unique brushstroke to them. "Strange Year" and "Realize My Fate" temper things down with a slow, brooding chaos that, as cliched as it is, is the icing on the cake. This is their best work to date and the great thing is, you can tell they're still evolving and fleshing out which direction to head in. It feels like a state of limbo, but in the best way possible.