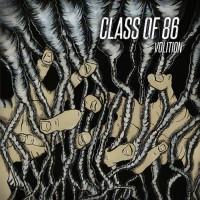 In 2014 Class Of 86 graced the punk scene with Future On Fire. It is an awesome full-length that did not get the credit that it deserved that year. Admittedly even I found it way into 2015, so why don't we call that record a hidden gem of 2014 shall we? Since that album’s release the band has done a bit of touring, but in 2016 they seemed to really focus more on writing and recording their follow up to Future On Fire.

Volition is a three-track EP where we see some different sides to Class Of 86. While lyrically for the most part Future on Fire was pretty dark. Musically it was aggressive with insanely complex instrumentation that could only really compared to bands like Propagandhi and A Wilhelm Scream or even bands that lean more towards the thrash metal genre. Volition is different in that musically Class Of 86 has gone darker. And that is readily apparent with the EP’s first song “Remain Contemptuous.” The track starts the release off with these super angry and hard-hitting chords that transition into a more heavy chugging progression. Of the three tracks this is by far the longest, clocking in at just over five minutes. At the last two minutes the song turns into this near-sludgy instrumental breakdown that doesn’t really need to be there. It’s slows everything down quite a bit and doesn't add a whole lot to the track. The band would have probably done better with “Remain Contemptuous” if they had just decided to leave that part out.

“Dead Hands & A Living Will” is much more straightforward. It is on the thrashier side of the spectrum and has a noticeable amount of really slick guitar fills that not only are in between guitar chords, but also between the lead singer’s identifiably deep vocals. If there is one thing that Class Of 86 can do incredibly well, it is write guitar solos that absolutely shred and they were incredibly successful in doing that yet again towards the middle of “Dead Hands & A Living Will.” The lead guitarist manages to play all of these crazy bends and hammer-ons in a fairly short amount of time, which is good in this case because it leaves you wanting more and it is not over done or too flashy.

You also get a lot of the heavy chugging riffs from Class Of 86 the third and final track “Proteus Effect.” The lead vocals especially mesh well with them in this tune. And again it is the guitar solo that really takes the spotlight. This time though it is two guitars harmonize while this wall of drums and cymbals just crashes down behind them. It's a major highlight of the whole EP.

Class Of 86’s Volition EP is an overall respectable follow up to Future On Fire. Though maybe it didn't workout 100% of the time on this release, the fact that the band experimented and pushed themselves is something that they should absolutely be credited and respected for. Give this band a shot if you haven’t yet.

Tobin Sprout: The Universe and Me