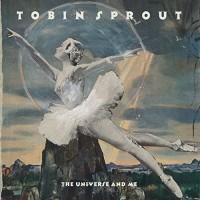 Every genre has its great songwriting duos; Lennon and McCartney, Morrissey and Marr, Mould and Hart, and in the early nineties Lo-Fi had Pollard and Sprout. While Rob Pollard has certainly written more songs, outside of Guided by Voices, than Tobin Sprout, the later of the two is every bit the songwriter. This is certainly evidenced on his latest release, The Universe and Me.

“Future Boy Today/Man of Tomorrow,” is a great fuzzed out garage number to kick the whole thing off. With guitars that are pure ear candy, the song does what any great album opener should do. It draws you in and gets you ready for the ride the rest of the album is going to take you on. The song is a throwback to early nineties indie rock, not that different from what you would have found in the band that made Tobin Sprout a house hold name in Indie Rock circles. When the music mixes with Sprout’s vocals that still sound as whimsical as they did twenty-five years ago, the track becomes a song that not only makes you want to hear what comes next. It’s one that you will find yourself returning to once you’re done listening to the album.

The next song, which is also the title track, is much more stripped back features a prominent piano and guitar melody sets the flow of the album in full swing. Throughout the album Sprout shifts back and forth between great fuzzed out garage numbers and quieter songs. The quieter numbers do a great job of showcasing what a great vocalist Tobin Sprout is. I would even go so far as to say that many of these numbers show that he is one of the most underappreciated vocalists from the early nineties indie rock scene.

One of the album’s standout tracks, "I Fall You Fall", brings both the louder and quieter elements of this album together in fantastic fashion. The song brings to mind Neil Young and Crazy Horse, in the best sense possible, with its somber vocals and world weariness mixed with acoustic guitar and some fantastic electric guitar work laid down over all over it.

This brings us to the central theme of this album, the wistfulness of childhood juxtaposed with the weariness of adulthood, which is chronicled beautifully throughout. Something I found myself thinking as I listened to this was how great of a lyricist Tobin Sprout is. While his former bandmate, the aforementioned Rob Pollard, tends to be a bit more cryptic in his lyrics this album finds Sprout taking a much more direct approach. Doing so, allows plain language to capture the beauty, the pain, and the somber nature of the themes he explores.

This album shows influences from so many artists I enjoy as songwriters. There are elements of John Lennon, the aforementioned Neil Young, and even some elements that bring to mind anti-folk musicians like Jeffrey Lewis and Daniel Johnston. While it’s unlikely to have the same influence as his earlier work in Guided by Voices, this is an album that is likely to get repeated spins on the turntable. It also is a solid reminder, that Tobin Sprout is every bit the songwriter and musician that his former GBV cohort Rob Pollard is.