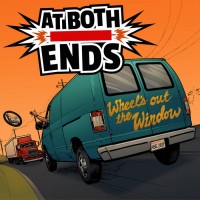 Ska-punk, and all of its iterations, has been around for quite a while. Its popularity seems to ebb and flow over the years, but there is always a healthy stable of bands keeping the dream alive. Sacramento’s At Both Ends is one of those bands, and they are doing pretty well at it. Their newest LP, Wheel’s Out The Window, rumbles on with some catchy ska, some skate punk-ish songs, and a mixture of both.

Let’s talk about the good first, shall we? This album is chock full of some fun songs. A couple are pretty great, too. The opening track, “Jump Ship,” is your typical ska-punk album starter. Pounding percussion, wailing horns- it’s a high tempo start that breaks down into a rhythmic ska interlude. ABE isn’t breaking any barriers here, but that doesn’t mean that this isn’t an exciting and pulse-pumping song.

There’s always one of two ways a band like this will break after an intro song like that, and ABE breaks towards melodic punk with “Out of Time.” Fast, furious, with well-timed and delivered lyrics, this song is reminiscent of Pennywise.

From here we get the usual scattering of ska, ska-punk, or punk songs. The first nine on the album are all particularly good and feed off each other as you move down the line. Notable standouts are “Sunshine & Love,” an awesome song that has one of the greatest ska segments on the album (probably my favorite); and “Your Way,” a straight up melodic punk number which the listener could be forgiven for if they confused it for an old-school NUFAN track.

The vocals are mostly done well. There are a few songs where the main vocals don’t quite reach where they want to go, but the backing vocals are plentiful and fit in with the style of music being played. One aspect I definitely did not like is one set of backing vocals that shows up occasionally: the “yowl!” sound has always annoyed me. I’m not counting that against the score (at least it doesn’t pervade the whole album), but if you are bothered by it, it may strike a bad note with you, too.

What I like a lot about this album is the sound production. Everything is mixed and produced to put together a good-sounding album. One aspect I was keen on is that kind of foot slapping sound that a kick drum can get when being played heel-toe, and this album has that in spades!

But where is there room for improvement? While the vocals just about stand on their own, there are some lyrical missteps that could’ve been avoided. A few instances of overly generic verses, and one notable moment where the timing of a group shout was just a bit too off (I’m looking at you, “Grave!”).

Lastly, and more importantly, the album seems tooverstay its welcome and, by the final lap, you start getting the impression that it is beginning to drag under its own weight. I would’ve been a bit more editorial in how many songs to put on the album. Thirteen seems a bit too much, and should’ve been whittled down to about ten tracks, saving the others for B-sides on a single, or an associated EP (the biggest problem would be which tracks to cut, though).

Still, when you get to the finale, “…It’s Why I’ll Die Alone,” you can’t help but be buoyed by the cunning composition and how the song builds into a furious crescendo of ultra-fast melodic punk, rounded out by a sing-along chorus that straight up rocks.

Wheel’s Out The Window is a fun album with a few minor flaws that may discourage those who aren’t into this mix of genres. But if you are into ska-punk, and want to hear something new aside from the established legends, you could do a lot worse than give At Both Ends a try.