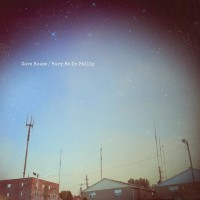 Dave Hause's Bury Me In Philly really sums up his life's work, not just as a musician, but as someone whose blood runs thick for the city he loves most. Whether it's with Paint It Black, The Loved Ones, or The Falcon, his versatility has always stood head and shoulders above; effortlessly as he swims from an aggressive range of music to more poppy, intimate material. And that's just what this album is -- a clear-cut extension of Devour and Resolutions which finds him shuffling through life, aching at the heart but still unflinching with whatever comes his way.

Most of the songs on this album are powerful testament to his character. The assortment of tracks won't surprise loyalists and end up being very digestible for new fans. However, one or two feel repetitive and lack a distinct identity at times. The ones that have such personality though, are so damn good. He also apes a lot of his influences here, as seen with the opening track "With You" -- a bustling, piano-driven melody that starts the foot-tapping off. He proceeds to pay homage to Bruce Springsteen on "My Mistake", with a country-influenced sound permeating later on via "The Mermaid" and "Wild Love." The latter stands out with harmonicas in the backdrop while the harsh message of the fire of youth permeates.

These songs feel like a man more experienced, mature and wiser. In fact, the record's much more settled in its Americana-influenced musical style. Rollicking jams like "Divine Lorraine", the AC/DC-esque "Dirty Fucker" and of course, "The Ride" (which feels like George Thorogood & The Destroyers' "Who Do You Love?") help shelve the boring feeling you get off other tracks, which frankly, feel tedious and have you skipping. It's just a tad heavy in terms of content. That won't stop you from recognizing Hause's folky roots and how he crafts yet another personal novel of triumph and faith. It feels like a few tracks could have been cut to make it crisper and tighter but that aside, you definitely want in on this, what appears to be Hause's diary used as a eulogy.