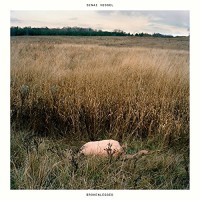 Some bands put out records that find them asking questions of themselves and the world, with subsequent albums answering. Sinai Vessel's Profanity asked, and Brokenlegged has responded; in the most bleak, morose manner. This album toils away with the sonic stamp of say, American Football meets Pedro The Lion, and emphasizes that the world isn't kind. It takes a depressive toll and this isn't even me being emo, it's just the harsh truth and reality that Sinai Vessel chose to elaborate on. Understandable if you're familiar with their previous narrative.

Quite a few emo bands pop up in terms of influence here -- The Hotelier, Donor, Modern Baseball, Nai Harvest -- as Sinai Vessel strip all layers back and expose themselves like never before. "Looseleaf" opens things with a Beach Slang haze but it's the warm, intertwining, guitar-intricate tracks that shine through the dark. "Ramekin" and "Dogs" (a response to "Cats" off Profanity it appears) are prime examples, with the latter feeling like a blend of Jimmy Eat World, Manchester Orchestra and Sunny Day Real Estate.

Influences and comparisons, as mentioned, can't be helped because they're present in spades, yet never bad enough to take away from the band's identity. "Laughlin" has that Death Cab feel but it's distinguished like Sinai Vessel's older body of work, which you know had them propelling towards an even bigger emo spotlight. Where they cut free, and they needed to because a few songs did feel by-the-numbers, is "Cork of Worry"  -- which burns slowly with a haunting melody before shutting the doors with a slightly grungy ending. More of this is needed, more roughing and less polishing, because this isn't a band meant to be refined. Raw, rugged and loose is where Brokenlegged shines, so here's to the future. A bright one.

Show Me The Body: Body War