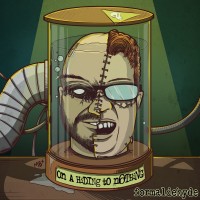 On A Hiding To Nothing

Formaldahyde, the new EP by London punks On A Hiding To Nothing, packs a lot into its brief, 14-minute runtime. Solid composition and production, catchy lyrics, and some good anthemic sing-along sections make this a top-notch release.

One of the first things to note about this EP is the commonplace subject matter of each of the songs, which isn’t immediately identifiable by the song names. Lead track “Swagger” deals with some dim-witted council estate bully whose sole response to any and all interaction is with fists. Tackling the humdrum and stuck-record sensation of never moving ahead in life is encapsulated on “Stuck Record.” And “London Road, Mate” follows our narrator on the cab ride from hell as the driver’s chattiness slowly devolves into a bigoted, racist, and xenophobic diatribe all because he feels comfortable with his “English and white” passenger.

I won’t tell you what the second track, “Call Me Flyboy,” is about because, while the subject can be as common as the other three, and maybe even over-used in the past decade or so, catching on by following the lyrics is as much of an enjoyable experience as the music itself.

So if OAHTN haven't really broken new territory on what their songs are about, why should you check out this album?

Well, first off, it’s not what the songs are about, it is how they are presented to you. OAHTN takes your basic song formats but twists them gleefully, to the point that what could be a rote, generic song in lesser hands comes across as intricately composed and, in some ways, operatic. I got a really strong ‘Frenzal Rhomb on their best day’ feel from these guys. Add in that no song is less than three minutes, and the longest tops in at four and a half minutes, and you get quite a lot of bang for your buck (or ‘pow for your pound’?).

Keeping these punk songs afloat is solid performance from all players, along with some serious high-quality production. The guitars and bass combine to form a solid and heavy sound, with a lot of quirky and unexpected riffs and solos from the former, and a bassline that doesn’t play it safe and tends give you a rolling experience from the latter. Of particular note is the drumming, which is high-tempo, mixes it up a helluva lot with fills and rolls, and sounds excellent. I often wondered how he keeps going, it seems as if he would be worn out by the end of each of these songs. If I were in a band, this would be the percussion I would point to and say “play like that.”

A multitude of layered and backing vocals also assist in revving up the engine, and each song has them in spades, all right where you want them to be and sounding great. Remember “Call Me Flyboy,” which I won’t tell you about? That song was already my fave on the album the first time through due to excellent vocals and a chorus that grabs at you and keeps grabbing as it pulls you in. Once you begin following the lyrics, though, you’ll likely find it as fun, funny, and clever as I did.

So what’s wrong with it? For all of its positives, there are a (blessedly) few points where the lyrics or vocals felt they were being a bit forced. Either through too many lyrics, the chorus being repeated one too many times on a song or two, or the need to change the pacing of the lyrics to make them fit (multi-syllabic hits quickly followed by one syllable per beat can be off-putting). This shouldn't be enough to put anyone off of the album, but it does show that a bit more polishing needs to be done on the song-writing and composition.

On A Hiding To Nothing is on to something here, and this EP is a serious step in the right direction. I only wish that it had more tracks, as I sincerely want to hear more of what this band can give. It is a great album, but falls short of Instant Classic or Must Have status solely due to the fact that it is an EP.

Show Me The Body: Body War