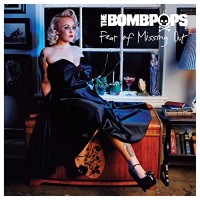 After nearly a decade of tearing up the SoCal punk scene and releasing several EP’s, The Bombpops have signed to Fat Wreck Chords and released their first official full-length Fear Of Missing Out. Up until now the band has been writing fairly consistent, pop punk tunes. That has all changed now with this record though. Fear Of Missing shows just how much range The Bombpops have within the pop punk sub-genre. Obviously, they have no issue writing tunes that are highly melodic and that have killer riffs, they can also kick out some Ramones-core and they even threw in some hardcore, which was an unexpected, but pleasant surprise.

The track “Sweet For Sorrow” is along the same lines of The Bombpops’ earlier material (think “Outta Hand”). It is very upbeat, but between the aggression in the high-pitched guitars riffs and hooks and the Poli Van Damn’s voice the song teeters between being light-hearted and an angry pop-punk tune, especially with lyrics such as, “I’m gonna use whatever it takes to ensure that you're not fine/You’re due to witness the worst thing you’ve ever seen/You’ve never met me.” It sort of leaves you guessing.

The band also touches upon some Ramones-core on this album most notably in the song “Be Sweet.” Fittingly, the lyrics were written by Brandon Carlisle of Teenage Bottle and it even sounds like an ode to the band. Of course there are a ton of swiftly played and palm-muted power chords that make up the bulk of the song, but The Bombpops balancing it out with a simple, but very complimentary little riff in between verses. This is also a great example of how well Jen Razavi and Poli Van Dam’s vocals work together. In “Be Sweet” specifically they take turns singing verses. Jen’s voice is on the softer, more melodic side, while Poli’s voice has a slightly of gruffer tone to it. And when they come together to harmonize in the choruses, their voices mesh together incredibly well.

Something that I don’t think that Bombpops fans would have expected is the amount of hardcore influence that is in some of the tracks on this album. It makes its most blatant appearance in the songs “Brake Lights” and “I Can’t.” “Brake Lights” sort plays this “tug-of-war” between being hardcore and melodic. During the verses you have Poli yelling over a very thrashy chord progression and then it totally changes into this extremely melodic chorus where once again both Poli and Jen harmonize beautifully together.

In twelve tracks The Bombpops cover a lot of ground with their first full-length. Fear Of Missing Out is a very dynamic pop punk record that ventures out into the many different styles within the subgenre that are all executed equally well by the band.