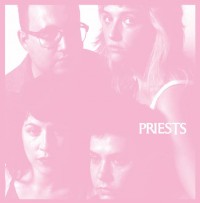 Priests’s Nothing Feels Natural is one hypnotic spiral. Repetition draws you in early, entrenching itself in the album’s DNA. There are plenty of political and societal fuck you’s throughout but to call it a “political record” does it a disservice. It is a difficult listen, one meant for like-minded individuals ready to study and re-listen.

Over the course of thirty-five minutes, Nothing Feels Natural never settles into one emotion instead opting for an array of different discomforts. “JJ” finds Priests evoking surf rock with strange keyboards while bathing in vocalist Katie Alice Greer’s raspy snarl. “Nicki” emphasizes its distortion and trance-like mindset. “Leila 20” is bouncier, musically reminiscent of The Coathangers filtered through a pop radio lens. “No Big Bang,” its best song, plays like an audible Alice in Wonderland, sinking in and dragging you down with it. The bass stays constant, the clap rhythm thrusts itself in your face and the narration will leave you dizzy. Musically, the entire record corkscrews. Daniele Daniele locks into one groove after another. G.L. Jaguar and Taylor Mulitz, on guitar and bass, respectively, get so much freedom but opt for a similar formula: repeat and seduce. It’s always effective.

For all the rhythm and melody, Priests avoid relief like similar-minded Savages. Even the pop-influenced title track asks the question, “If I go without for days, will I finally hallucinate a real thing?” It is an album of rebellion. “Pink White House” has Greer ironically talking about the American dream as Netflix, SUVs and safety masturbating. The band jumps into subjects many wouldn’t dream of tackling with a clear viewpoint and a nasty blanket of fuzz. There are no easy solutions. Priests are a stimulating band and their debut full length shines a spotlight on the negativity of complacency. And it's a loud, bright light.

The Bombpops: Fear Of Missing Out

Save Ferris: Checkered Past [EP]