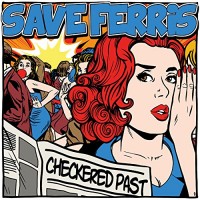 A friend of mine came up with a theory once that any band whose first big hit single is a cover is pretty much doomed to never have another hit. If you think about it, the theory stands up pretty well: Orgy, Alien Ant Farm, Dynamite Hack, Save Ferris. There’s one band I know of that beat the curse, and that was Limp Bizkit, and that’s just because the curse came and hit them later in their career even harder. Save Ferris was doubly cursed because the mainstream’s fascination with ska in the mid-90’s lasted about 15 minutes, with just a small handful of bands continuing to persevere on the airwaves. If you’ve ever listened to Save Ferris’s second album (and few have), you’ll find them putting down the horns a little more often to try to put together some more radio friendly pop-punk hits, but they still failed to produce one.

Now it’s 2017, and Save Ferris is finally back with their first release in 18 years. (Sort of.) When they titled the EP Checkered Past, they were being quite clever, combining the ska imagery of checkerboards with the fact that Save Ferris has had a tumultuous past. In fact, I say that it’s the first Save Ferris record in 18 years, but really it’s just lead singer Monique Powell performing with a completely new group of musicians after two years of litigation where she managed to legally wrestle the Save Ferris name away from her former bandmates, including the band’s primary songwriter, Brian Mashburn. So, essentially, what we have on Checkered Past is a new Monique Powell project under her old band’s name because the name comes with a modicum of clout as “that band that covered ‘Come On Eileen.’”

Knowing that ska doesn’t really score you radio hits anymore unless you’re a sad stoner knockoff of Sublime (The Dirty Heads, Pepper, Sublime with Rome), Powell and company don’t try to do what they did on Modified and move away from their ska roots to try to desperately grasp at mainstream success. Rather, they embrace a classic third-wave ska sound, content to play to the die-hard ska fans instead. Unfortunately, the play-on words of the EP title shows more lyrical talent than the entire rest of the album. It kicks off with “Anything,” an annoyingly uncomplicated and overly chipper love song that really seems to think that “My cats think that you are the shit” is a clever line. “New Sound” is probably the most inappropriate title you could come up with for an old-fashioned reggae jam. Absolutely nothing about “New Sound” sounds new. “Golden Silence” starts to show that the band backing up Powell is actually really talented, as they put together a really interesting song that could have been a great instrumental. Unfortunately, as Powell sings about wanting someone to stop talking so much, I ironically wanted her to shut up and stop ruining the great music playing behind her. The closing track, “Goodbye Brother,” is the only song on the EP with any sort of lyrical subtlety, but by that point, it’s too little too late.

Back in the 90’s, when Save Ferris had their 15 minutes of fame, there was chatter about Monique Powell becoming a superstar to rival Gwen Stefani. But where No Doubt was able to outlive the mainstream radio’s brief love affair with ska music by incorporating other elements into their music, Save Ferris failed when they attempted to do the same thing, and the band pretty much fell apart when their second album failed. Now Powell has come back to see if there’s any of that stardom left for her to scoop up, but proves that she doesn’t have the writing chops to lead a band without someone like Mashburn writing for her. Checkered Past is a hollow echo of what Save Ferris once was, and really isn’t worth a listen.