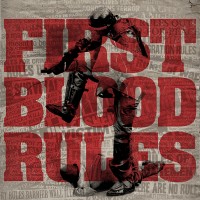 It is always important to be objective when reviewing new records, that being said, it is important to always be objective in general. I try to avoid judging a book by its cover, and sometimes that is more difficult than it sounds. When First Blood first emerged on the scene, they were a fun band that had one goal – to create the most chaotic and violent mosh pits possible. Following their break out success in the hardcore scene, the band got continuously more serious. I enjoyed Killafornia for what it was, which was a heavy, mosh metal record. It has been almost a decade since First Blood’s debut full length, and not much has changed.

I think it would be foolish to expect a band like First Blood to start marching into new territory this late in the game; it was probably a smart move to continue doing what they are good at. Rules is a heavy and straightforward hardcore record, packed with floor clearing breakdowns. The breakdowns seem to have become somewhat more deathcore-like, imagine a deathcore band with none of the blast beats, and that is sort of what Rules reminds me of.

My biggest problem with Rules is that I find the concept to be a bit cringe-worthy. I have a really hard time wrapping my head around a song titled, “Fuck the Rules” that has been written by a group of full grown men. Especially when I am fairly certain the members 20’s are solidly behind them. As far as the message goes, it is heaviness over content. This is not rocket science happening here, in this genre however, it is a forgivable offence, but it took me a few listens to warm up to it.

My personal criticism aside, Rules is not without some merit. There are stand out songs, and the breakdowns are interesting and heavy. I can enjoy this for what it is, but it is important to understand that the saying, “it is what it is” is a crucial aspect of Rules.

First Blood have done a good job at putting out a well written, mosh oriented hardcore record. I am sure that heavy hardcore fans and deathcore fans alike will be pleased with Rules. It took me a few listens, but the nostalgia factor kicked in and so did the groovy riffs. This is far from treading new ground, but if you are looking for some pissed off motivation music, and you have a soft spot for old First Blood, Terror, or Full Blown Chaos, Rules will not disappoint.

Save Ferris: Checkered Past [EP]