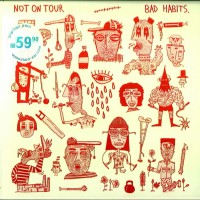 Don't you hate when you think you have found a new, awesome band and then discover that they have been around for a while? Well that is pretty much the case with Not On Tour. The band has several albums and an EP in their catalogue already, but it is their most recently full-length Bad Habits (produced by Yotam Ben Horin of Useless ID) where they have landed into this sweet spot of between breaking out some awesome pop punk and killer melodic hardcore both of which the band is able to write and perform equally well.

One of the really incredible aspects of this album and Not On Tour’s overall style is that they accomplish so much in each song and yet none of them hit the two-minute mark, leaving you craving more and listening to the album over and not getting anywhere near sick of it. It is truly addictive. And what makes Bad Habits so addictive is the amazingly catchy and anthemic vocal melodies from frontwoman Sima Brami most notably in the track “Different Kind Of Weather.” The band as a whole truly shines when Sima’s anthemic vocals are sung over not chords, but very heavily distorted, but bright guitar riffs and fills in songs like “Stuck In Rut” and the title track. They are so tight and in-sync that they come off as more of unit rather than being just four individuals playing music together.

The other track that is also worth mentioning is called “Maybe One Day.” This song stands out not only because of the stellar vocals and musicianship like in the aforementioned songs, but also because of the way it was put together. “Maybe One Day” starts out with a lot palm-muting coming from the guitar and then suddenly bursts with energy in the choruses once again from Sima’s vocals, but also from the stellar drum work and impressive backing vocals that accent and compliment Sima’s extremely well. There is also this really intricate guitar interlude that leads up to this outro that acts as more of a grand finale for the track than anything. Sima’s vocals hits extremely high notes while the backing vocals cool it all off just little bit with their “oooh’s.” Again, Not On Tour packed all of this into a song that, in this case, doesn’t even hit the minute-and-a-half mark and it leaves you wanting more.

Not On Tour really made everything work so well on Bad Habits. From the musicianship, to the lyrics, to the performance, to the production -- it is pretty hard to find many flaws here. The sixteen tracks on this album are so different from one another that it is hard to not be totally engaged from beginning to end. And because the run time is only around 21 minutes, it really isn’t difficult to give it a second spin right away because it flies by so quickly. If Not On Tour can continue to keep up the fantastic work they have done on Bad Habits then I have no trepidation in thinking that we can expect great new material and success from them in the future.

You can listen to this album here.