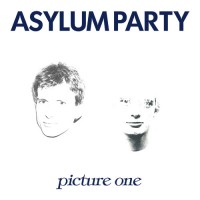 Want a little dose of Coldwave to add to your playlist? Expand your mind man, and give a listen to the band Asylum Party and their debut album Picture One!

Originally self-released in very limited quantities in 1988, Picture One is one of the original Coldwave albums that came out before this niche genre was even thought of. More or less the music Asylum Party made was seeped with Post-Punk and Gothic undertones, but they did more than that and instead of just riding those styles to the bank (ppffffttt…), they managed to make the music a bit more upbeat. Well, at least upbeat in overall sound, sorta like the radio pop songs by The Cure or Depeche Mode.

With only six tracks barely clocking over 25 minutes, Picture One is a neatly tight package of what you could consider early underground dance music by way of the genre’s mentioned above. It’s easy to see someone dancing like Molly Ringwald in some dark club basement, (Hello NY’s Pyramid Club and their awesome 80’s night back in 2008!).

The tracks are sorta samey, but there are some nice changeups. Track 2, “Sweetness...” bleeds into the acoustic instrumental of track 3, “...Of Pain” and it’s a nice one-two punch. Track 4 “Before the Smile” is lush, melodic, and has a nice Dream-Pop sound, which is awesome in hindsight because not many know who this band was and how their music was quietly inspirational for many genres to come. Overall, the album is like one solid piece of music that was trapped in a haunted keyboard waiting to be unleashed. Icy cold, but smooth flowing; this music will be nice in the background while you study or sit in the dark.

The niche and obscure can be a real treat sometimes, so perhaps give this a listen if it peaks your musical interest. And if you want to name drop a band no one knows about, you can be “that kid” and blow people’s minds. Expect more of this once you get to college.

Dig this? Dig it…

Mr. Elevator and The Brain Hotel: When The Morning Greets You