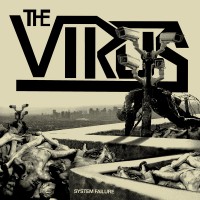 After more than a decade, The Virus is back and they’re pretty much sticking to a painfully generic street punk sound on this new release. Consider this a collection of b-sides from The Unseen’s State of Discontent, because, sonically, System Failure brings absolutely nothing new to the table.

That’s not to say, by any means that this album is unlistenable; there is a pretty solid foundation behind many of these tracks, and, until the gargled monotone yelling starts to get old and lose its punch, many have a great energy to them. It seems, however, that the focus of this album is not intended to be on the music, but rather the message.

Though the meat of the title track is not strong enough to warrant it being an opener from an instrumental standpoint, it seems to have a bridge that would best fit the first track thematically; it seems to provide the thesis from which the rest of the album builds upon. On first listen, the lyrics seem shallow and lazy as they merely mention some current global issues with group vocals reciting “failure” following after, but this passage is actually used as an organizational device for the project in following tracks, where some of these briefly mentioned issues are expanded upon with greater detail. I will give The Virus credit for their diversity in subject matter as the album does cover some topics, such as PTSD, which don’t seem to get as much coverage in contemporary political music, but when it comes tracks like No Peace and Verdicts, the band doesn’t have all too much to say that hasn’t been said already.

Entitlement is a nihilistic anthem that seems to come out of nowhere amongst the broader global political issues that this album tends to concern itself with. It’s a shame, though, that the track is so lazily assembled, given that the message is one that I really felt like I could get into. Not to mention, that the “you don’t make a difference” sentiment is completely undermined just a couple of tracks later with Burn It Down’s echoing sample: “don’t let it happen: it depends on you”. Speaking of which, Burn It Down is, by far, the worst track here. I’ll just say that the dry arena rock feel of the drums does not pair well with the grading one-note guitar lick that does not let up and the less than eloquently written lyrics, dripping with misunderstood preteen levels of angst. Need I mention that the last minute and twenty seconds of the song is reserved for the repeated chanting of “the whole world sucks”?

Overall, this album isn’t completely unlistenable or even devoid of creativity, and I do not by any means want to give off that impression, but the appeal of System Failure rapidly dwindles upon multiple listens. It’s fine for what it is, but it’s still not much.