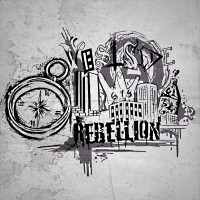 put out your own records

Like a lot of cities, Grand Rapids, MI has a bit of an incestuous punk scene. In other words, a lot the same guys play in a bunch of different bands with different combinations of the same bunch of guys. Westside Rebellion is the product of such inbreeding, but it doesn’t seem to bear any of the typically ill effects. If anything, WSR feels like an outlet for all the bile that these guys can’t necessarily purge in their primary bands. WSR is made up of guitarist/vocalist Thomas Gun, guitarist/vocalist Joseph Henry, bassist/vocalist Zack Godi and drummer Nate Maynard. These guys are involved in local bands and solo acts like Murder Party!, Holy Warheads, Dead Eye Zack and American Zombie Inquisition. Westside Rebellion refers to themselves as hardcore, but really it sounds more like a combination of hardcore and classic anarcho-punk.

Three of the four guys take a crack at lead vocals, and each has a distinct voice. Gun does the lead shouting on the first two songs, “Fist Fight” and “Hey Policeman”. They are exactly what you’d expect them to be, anti-Trump, anti-fascist and anti-cop. Both songs have the type of choruses that you’d be hard pressed not to shout along with. “Satan, How Are You?” is a darker and more philosophical track that features the gravely voice of Henry. All three guys sing on every song, so there’s lots of stuff going on in the background. Godi’s voice is the raspiest of all and he takes the lead on the the inspired GG Allin cover “Don’t Talk To Me”. It’s from Allin’s early catalogue when he was still playing it straight. It was long before he became the blood and feces soaked scumfuc you all know and love.

Closer “Danica Patrick” appears to be the band’s signature tune. Without a lyric sheet it’s hard to know exactly what’s going on, but Gun, Henry and Godi all trade back and forth on lead vocals. There’s lots of talk about drinking, an extended rant against gentrification, several of GR’s westside dive bars get name dropped and there’s even a reggae breakdown. EP has a lot of things going for it. (A creative name is not one of them.) All the songs are catchy as hell. It doesn’t take itself too seriously, and it’s actually fun to listen to. There’s no grim, metallic NYHC here. There’s actually a strong element of humor. It sometimes walks a fine line between parody and true political hardcore. Westside Rebellion’ debut finds just the right mixture of hooks and aggression. Highly recommended.