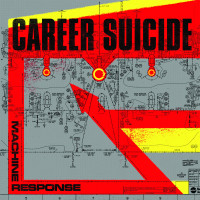 Although perhaps they are more influenced by the initial wave of hardcore than any other period, Career Suicide’s material has never felt dated or retro. Rather, because the band adheres to the genius simplicity of simple, sharp, aggression, their recordings has always felt more timeless than timely. So, it’s no surprise that their first LP in TEN YEARS, Machine Response clicks in right where 2006’s Attempted Suicide left off.

Tracks like “Distractions” and “Borrowed Time” still cut right to the bone with 90 second blast of rage. But, despite that frontman Martin Farkas channels Keith Morris and Chris Doherty in equal measure, it seems that for every word of outrage, there’s a wry smile hidden behind the letters. In part this is because Machine Response’s lyrics deal more with abstract concepts than literal examples. “Point of No Return” could be about the contemporary political situation, but it could be about any political situation, or it could be about any personal situation. Farkas seems to build his lyric into a flexible shape so that while they appear to be about extremely personal things, they’re vague enough to be set to any number of scenarios while detailed let you know that this is not a put on.

The band is also giving themselves some well deserved spaced. The early Career Suicide EPs seemed to want to cram as much sound into as little space as possible. The end result being a shocker of a record that was always red-lining. Here, the band keeps their forceful hand, but play with atmospherics to a greater degree than ever.

“Distractions” opens with a lumbering, menacing reserve that would fit alongside a lot of those classic era hardcore anthems. “Taking you with me,” a viciously spiteful number, ghoulishly opens with a bouncing, dixieland piano. Like Farkas, the band is having a lot of fun here despite the dour messages espoused.

To be fair, there are a lot of hardcore bands and there are a lot of neo-hardcore bands. One would think that with ten years removed from the scene, Career Suicide would be washed away by the wave of like-minded individuals. But, there’s a reason this band was able to reconvene for an LP after a decade and it’s the same reason people still want it. Machine Response juggles the rage and whimsy of hardcore without trying to hide that it’s doing exactly this. The fact is, no matter how pissed off people are, they still like to have a good time and shake their worries out. This record is made for exactly that kind of release of energy.

U2: The Joshua Tree