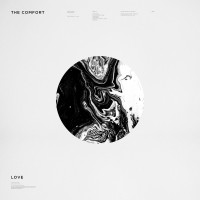 When someone claims that a band has managed to put "a new spin on an old sound," it can come off as a bit trite. Even now, new bands continue to twist and contort the ‘post-hardcore’ sound (alongside its various emo, pop and alt-rock hybrids), however most fail to garner any form of legacy, instead falling by the wayside of easy comparison and being guilty of carbon-copy syndrome. However, Brisbane outfit The Comfort are not destined to be one of those bands. On their second EP release, affectionately titled Love, this Australian two-piece (fleshed out by vocalist/guitarist Liam Holmes, vocalist/bassist Dom Harper, alongside touring members Marcus Parente and Nic Osbourne for guitar and drums respectively) showcase a rare ability in today’s musical climate: being able to synthesise collective musical influences—without blatantly copying them—and emerging with a sound that’s fresh and engaging.

The opening tracks of ‘Everstone’ and ‘Love & Other Drugs’ are imbued with a swift undercurrent of unbridled energy that’s almost breathtaking. These tracks are complimented by the rich vocal interplay between Holmes and Harper, as they trade off one another with soft croons and confident choruses punctuated by bursts of mid-range screams. While ‘Love & Other Drugs’ draws its power from a laboured percussive rhythm in the verse and a euphoric, gravel-throated harmony in the chorus, ‘Everstone’ successfully utilises stop/start dynamics and vocal layering to maximum effect. The lead guitar work here is phenomenal, showing such an attentive ear for melody and cadence, that each sparkling lick or delightfully hung note resonates effortlessly within each track.

However, it’s when The Comfort decide to take things down a notch that the group’s knack for mature and inventive songwriting truly shines. Clocking in at over five minutes, the elegiac ‘Forgive / Accept / Love’ combines intricate instrumentation with lyrics that hope to shine a beacon of optimism from the darkest of circumstances. The atmosphere of ‘Dysphasia’ builds and builds, with crisp hi-hat, choral chants and a simplistic yet striking riff, before it reaches a huge, gut-wrenching crescendo in the bridge. Given that this track also takes its name from the medical term for ‘impairment of speech and verbal comprehension,’ the final spoken words of “I just want to set you free/We’re both just one big mess of anxiety,” feels incredibly poignant.

While ‘Your Heart’ benefits from its infectious verse and soaring chorus, it’s the closer ‘Deprime’ which ultimately steals the show. Showcasing a clever understanding of musical tension, Holmes lulls the listener in with a melancholic and vulnerable vocal performance, before an unanticipated drum break suddenly drops the listener into a stirring silence. And just when it feels safe to exhale, Harper arrives with his pained, mid-range yell and the entire track positively erupts with feeling. Sure, it might be the oldest trick in the book, but god damn if the ‘soft-loud-soft-loud’ play doesn’t sound fantastic after all these years—especially when it’s executed this perfectly.

It’s hard to find a fault with Love. With only six tracks spread over a concise 27 minutes, and superb pacing throughout, it’s difficult to lose focus with this release and—if anything—the only complaint is that it’s far too short; there’s simply not enough of it. The Comfort leave no room for gimmicks or clichés, having complete confidence in their musicianship, songwriting and earnest performances. Hell, there are bands twice as old and well on to their fourth or fifth albums, that would kill to be able to create and write songs this powerful. If anything from early Thursday records, to latter day Hopesfall, or Anthony Green-era Saosin is up your alley, then I strongly implore you to give Love a listen, because it’s a release that’s very much worthy of your devotion.