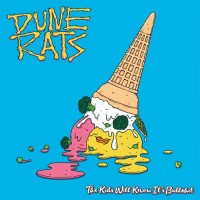 It’s a bold move to call your sophomore LP something as brutally honest as The Kids Will Know It’s Bullshit. But for Australian trio Dune Rats, it’s a title that’s more self-referential than strictly taking the piss. As a collective, they’ve always shown a knack for mixing analogous sounds like a cheap and nasty happy-hour cocktail and their second full-length album is no exception, with a tongue-in-cheek blend of surf-rock, garage punk and ear-worm melodies. Much of the record is propelled along with simplistic yet effective musicality, where Danny Beausa’s jagged guitar twists and bends around his groaning Aussie twang, as Brett Jansch delivers crunchy bass notes with explosive yet tempered percussion from BC Michaels. It’s a familiar sound that easily fits alongside acts like Wavves, FIDLAR and Pissed Jeans, while also nodding respectfully at the legacies of The Ramones and Nirvana.

Opener ‘Don’t Talk’ is a far-more introspective, heady number than the pot-head ridiculousness of ‘Dalai Llama, Big Banana, Marijuana’ which kicked off their self-titled debut. Warped riffs and rumbling bass compete for primacy, as Beausa declares that “I'm never gonna cut my hair” and passionately describes an ode to insomnia. Tracks like ‘Demolition Derby’ and ‘Braindead’ keep the pace up, working as fun pop songs, with catchy refrains, easy-going percussion and light backing vocals. Things slow down slightly on the tropical, surf-rock lullaby ‘Like Before’ and the mid-tempo ‘Counting Sheep,’ which functions off tales of digital paranoia, slowly-encroaching madness and lofty driving riffs. ‘Mary’ bursts in with a cavalcade of angular riffs, gravelly bass and explosive drums, as Beausa’s softly-spoken, lovelorn verse explodes into a whirlwind chorus. While the bratty punk of ‘Buzz-kill’ works overtime to call out that one dude at every party that's forever trying to harsh everyone’s mellow, with Beausa taking the old man to town and screaming “Fuck me? Fuck you and your attitude!”

With this even mix in scope and structure, the album highlights arrive around the middle, with the one-two knockout punch of single ‘Scott Green’ and ‘Never Gonna Get High’. The former is a raucous two-minute banger that relies heavily on a singularly entertaining premise: “Who’s Scott Green?” While it could be taken as social commentary on the pervasiveness of drug culture, or just someone who really needs to score, the fuzzed-out bridge and background coughs do more than enough to soundtrack an epic night that you'll gladly forget. The latter track picks up when the search has finally ended and the come-down is imminent, as the chorus implores addicts both young and old alike to “Do it ‘cos you wanna/Wanna ‘cos you gotta.” However, Beausa is firmly resolute, confidently telling the listener that he’s “Never gonna get high, no more,” before the track descends into a maelstrom of distorted voices and empty platitudes worthy of a Hunter S. Thompson anecdote.

While they might not be as poignant as The Smith Street Band, as endearing as Camp Cope, or as radio-friendly as Violent Soho, Dune Rats have more than enough to offer as an Aussie export than just rampant party-nihilism. Amongst its surf-rock backbone and garage-punk sensibilities, The Kids Will Know It’s Bullshit broods with a sense of introspection and thoughtfulness that’s belied by the drunken, debaucherous sing-a-longs of anthems like ‘6-Pack’ and ‘Scott Green’. Even the eponymous closer ‘Bullshit’ is self-aware to the point of hazard, with perhaps the most fitting of all Gen Y's exclamations: “Everything you say is bullshit.” There’s clearly more to Dune Rats than just getting baked and knocking back tinnies, but it’s likely that the intended audience is often too despondent and fucked-up to care. And that’s perfectly fine.