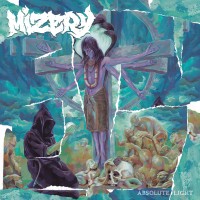 Mizery are new(ish) band from Southern California, San Diego to be exact. With a few EP’s and demos under their belt, they released their first proper full length - Absolute Light in 2016. While it might be easy to pigeonhole a band like Mizery in the heavy hardcore scene, Absolute Light showcases some different influences that work to separate Mizery from the pack of West Coast hardcore bands.

There are many hard-style, and at times even rap rock influences on Absolute Light, with songs like “Mizery” and “Power of Peace” exhibiting strong nods to Biohazard. There are well-placed metal and melodic moments that even-out the progression of the record. The song “One Kiss” brings to mind Life Of Agony with a well-written melodic chorus. The rest of the record moves between thrash/crossover and other elements of hardcore. Mizery have done a good job at writing a diverse metallic hardcore record. It is sort of as if the band brought their favorite bands from the East and West coasts and mashed them together. The result is a pretty fun and enjoyable listen.

The production and flow of Absolute Light is satisfying, with songs varying in length from a minute and a half to just over the three minute mark, with a melodic instrumental interlude thrown in for good measure. With this release, Mizery display a marked growth in both their instrumental proficiency, as well as their song writing skills as a band. I was expecting another run of the mill hardstyle record, and was pleasantly surprised with a hardcore focused crossover record. While the hardstyle and hip hop influences might not be for everyone, I find them to be enjoyable and well done. It does not come off as cheesy or pretentious, although some steadfast metal purists may disagree, they should lighten up.

The band has done a really good job at keeping the songs fresh, and avoiding redundancy and trendiness. Mizery definitely deserve any attention that they get, and in my humble opinion, they deserve more than they are getting. If you are into thrash or heavy hardcore, with a soft spot for bands like Biohazard or Furious Styles, Absolute Light might be right up your alley.