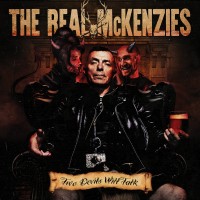 The Real McKenzies seem to be a band that you can rely on to release something every two years or so, and you can pretty much count on the fact you will get some great Celtic punk jams from them each time. The band has followed up their 2015 album Rats In The Burlap just about right on scheduled with their brand new album Two Devils Will Talk.

For the most part The Real McKenzies do what they do best on this album. They have written a bunch of punk songs such as “One Man Voyage” and “One Day" that have vibrant and anthemic vocal (and gang vocal) melodies mixed with blaring bagpipes on top of heavy-hitting, distorted guitars. Two of the most notable songs on this record “Northwest Passage” and “Due West” have many of these same attributes, but they start out with angelic A capella intros have incredibly catchy bagpipe leads.

It is important however to point out that not all of the fourteen tracks use the same formula as the aforementioned songs. Tracks such as “Drunkards Lament" are really just melodic punk tunes minus the Celtic flavor. They are solid, but they don’t really add much or take away from the record as a whole.

The song that stands out the most on the tracklist is “Fuck The Real McKenzies.” With a title like that, how could it not? It is a self-deprecating and funny look inwards that the band takes in the lyrics. They even reference their Celtic-punk peers Flogging Molly in it as well.

The Real McKenzies have once again written a solid Celtic punk record. Though it doesn't really push many boundaries of their sound or the sub-genre that much, long time fans of the band and Celtic punk in general will find Two Devils Will Talk satisfying and enjoyable.

The Replacements: The Shit Hits the Fans