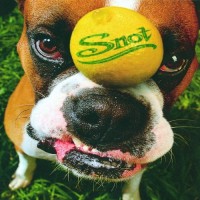 Snot were a Groove Metal / SoCal Hardcore band that were sadly lumped in with the late 90’s Nu-Metal scene.

Lead singer Lynn Strait moved to Santa Barbara when he was a teenager and quickly drew to the local Punk scene, eventually playing bass in a Thrash Punk band called Lethal Dose. He later formed the band Snot in 1995 becoming lead singer. In short time they gathered a following around the Los Angeles area for their live shows and playing alongside more well known touring bands. The group released a cassette demo and eventually caught the attention of Geffen Records who signed them and had their debut album Get Some released in 1997.

Where the Nu-Metal tag comes in is simply because of cross-pollination with the West Coast Nu-Metal craze and Ozzfest 1998. Snot became one of the standouts on the second stage that year of the tour as well as garnered a reputation for being a bunch of jokesters (Lynn interrupted a Limp Biscuit set running around naked and getting arrested) who didn’t take themselves too seriously. Sadly, less than a year after their debut Lynn Strait was killed in a car accident and the band broke up

Despite the tragedy, there is something good here. This album is quite a showcase of talent that sadly did not get to blossom. The songs are tight, fast, funky, and angry. There are no dropped tuned Jinco jean songs here. No, instead you get tracks like opener “Snot” which sounds like Infectious Grooves crossed with very early RHCP but sung Hardcore. Same style carries over into pretty much every track on the album when they are not going a bit Funky with instrumental tracks like "Get Some O' Deez" and "Get Some Keez" which are all callbacks to album highlight “Get Some”. A more slow buildup type song, “Get Some” has Lynn crooning like he’s a friggin' lounge singer only to explode like Mike Muir.

Other quick highlights to check out are songs “Stoopid”, which sounds like they were going for some weird Metal version of Funkadelic, and “Mr. Brett” which has Theo Kogan from the Lunachicks doing guest vocals. Sorta reminiscent of “Total Hate” by No Doubt and Sublime except not Ska.

There could be more to say about this one album, like how it does not sound anywhere near Limp Biscuit or Korn, but instead sounds like an amalgamation of 90's California Punk and Metal and the local scene that cherished them. Or how it also holds up well 20 years later and the cult following that it's garnered. But for now, it's a just a simple 14 track album that doesn't do more than it should and that's totally fine.

If you like Punk, Metal, Funk and more out there bands such as Faith No More and Jane’s Addiction you should try this. Dig it…