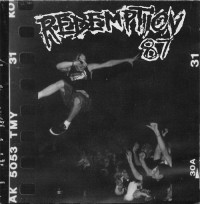 Redemption 87 were one of those bands, filled with ex-members of… lineups, who came and went in a rather short period of time. They indeed were a bit of a super group, having guys like Timmy Chunks, Eric Ozene, and Jade Puget in various lineups. And their first full length, released on New Age Records, was one of the strongest blends of hardcore punk in the modern era. Released in 1998, the self-titled full length at once mixed the melody of the California sound with the aggression of the New York sound, and it did so with a subtlety that has eluded many.

The elemental aspects of this record came from Eric Ozene’s decidedly offbeat vocal delivery and Timmy Chunks’s guitar style. Both played at a furious pace and with great originality. The record’s opening song, “Rumor Mill,” opens with the just that pace, moving through Chunks's cleverly balanced horse-hopping riffs and ring outs that accent and lead Ozene’s  growling vocals.


But it was with the record’s third track that Redemption 87’s ingenuity shone so well. “Spidey’s Song” is one of the truest artifacts of the blend that Redemption 87 so greatly captured. As Ozene delivered socially conscious lyrics about race relations in the country, the guitars ran through simple and melodic riffs. The drums, for their part, complemented everything perfectly. The crescendo hits with an all-time sing along, only to close out in just a minute and a half. Ozene showed off his Ray Cappo-inspired growl but also that he was more than capable of harmonizing and pulling into more melodic territory.

The record’s most reflective and insightful song came with “From Experience.” While the song follows the patterns laid out in the opening tracks, the lyrical content here showed a candidness that isn’t often expressed in the punk underground. As the song breaks into its slower tempo and lets the bass line lead, Ozene pushes forward with the lines: “I still believe in many things. But now it’s years later. Changed my favorite band, I’ve changed the life I’ve led. But there are some things I’ll never abandon.” The simple honesty of it all, really.

Closing out the record, and most appropriately so, was a cover of 7 Seconds’ “You Til I Die.” Coincidentally further showcasing Ozene’s melodic sensibilities, and the band’s deep-rooted understanding of its musical history. Cover songs are a bit of a lost art these days due in no small part to every damn band on the planet getting back together. But there was a time when bands not only covered songs, but also recorded those covers. Redemption 87 would go on to record covers of both Cro-Mags and Bad Brains. Not much else to say about that for their musical acumen.

This record was, and remains, extremely close to me and that’s why I wanted to review it so many years after its initial release. Redemption 87 did a reunion at Gilman St. a few years back. Not sure how it all went. But I am sure that this self-titled record still has great impact. It didn’t see a huge push on a huge label, but New Age Records was big enough at least for that era. I’m sure you can find it out there somewhere. And if you like your hardcore punk angry but catchy, and strong-willed but reflective, do yourself the favor of finding Redemption 87’s first record.