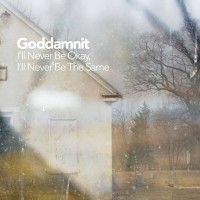 I volunteered to review Goddamnit’s I’ll Never Be Okay, I’ll Never Be the Same knowing nothing about the band. And I am so glad that I did, because this is an absolute powerhouse of an album. There was something very familiar about this album, and I kept trying to think of what it reminded me of. I think it was just that it sounded like a combination of so many different familiar things: Hot Water Music, Sunny Day Real Estate, even some more recent artists like The Menzingers and the Deforesters. The album combines melody with strong, powerful punk that starts pummeling you from the beginning of “Fix Dis” and doesn’t let up until the end of the penultimate song, “What Was Left.”

There are really only two things wrong with I’ll Never Be Okay. One is the interjections between songs of clips of a woman talking on an answering machine who sounds like she’s either on drugs or schizophrenic, babbling on nonsensically about life. The device falls rather flat and comes off as extremely pretentious. The other flaw is the final song, “The Message.” Taking a radical departure from the rest of the album, “The Message” switches gears into what sounds like some sort of douchey Uncle Kracker nonsense. Pretend the album ends on track 10 and it’s close to perfect.

I’ll Never Be Okay, I’ll Never Be the Same is this Philadelphia band’s sophomore effort, and boy does it show promise. It’s a furious, melodic near-masterpiece that promises a bright future for this band. I may not have known what I was getting into when I agreed to write about this album, but now I’m seriously excited to see what this band does next.