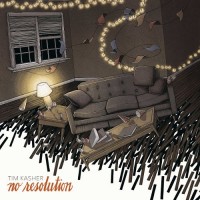 Tim Kasher is a man who has taken on many different roles in the music scene, from the emocore of Cursive to the more musically subdued, but no less bitingly honest, The Good Life. With his latest solo album, No Resolution, he turns the volume down, adds what sounds like a small orchestra, and creates one of the most intimate sounding albums of his career. The lyrics, as always, create deeply personal snapshots of his life and the lives he brings to life.

The instrumentation on “Runts” brings to mind the lush arrangements of American Gothic era David Ackles put within the framework of more contemporary rock music. The song finds Kasher, seemingly, trying to convince himself that he can settle down. With lyrical allusions to his grandfather laboring for his family, the song paints the picture of a man yearning for something simpler than what he has. But, having no idea how to actually achieve that within the framework of the life he’s built for himself.

Like many musicians before him, Kasher is coming to terms with adulthood. While no stranger to albums that are confrontational in grappling with their subject matter, he’s never done it quite like this before. This is so subdued musically, that you get a real sense of his voice as it rarely rises to a shouts or screams found on his previous material. Which I think adds another dynamic to his sound. Despite the album not having a lot of dynamics, sonically speaking, the stories Kasher is able to weave are so intimate and detailed that you find yourself sucked into the characters in his stores. You rise and fall with them, in a way you simply couldn’t on Cursive or Good Life albums. Don’t get me wrong, there are moments by both of those bands that are gut wrenching. But you feel like you’re looking through a window with this album, with Cursive you felt like you were staring into a mirror ten seconds before it got punched and with The Good Life you felt like you were sitting on a couch listening to someone tell you their story.

The album does get a but louder towards the end, on tracks such as “Messes” and “Post-Script,” they let you know that Kasher still agonizes over life just as much as he did on Domestica. But instead of being a twenty something raging against the world, he’s a man in his early forties. It’s not that the world makes more sense to him now than it did seventeen years ago, it’s that he’s learned to steady himself within the chaos. Which sums this album up wonderfully, steadied chaos, the lyrical content contrasting with music to create near cinema on record.

People expecting another album reminiscent of his previous work, are likely to be disappointed. I encourage you not to do that. I made that mistake the first time through, and disliked it. I sat it down for a day and returned to it on my headphones after work one night. I was floored by how someone I expected one thing from had so beautifully executed something completely different. This is what angst sounds like when it ages gracefully, and this album is definitely worth a listen.