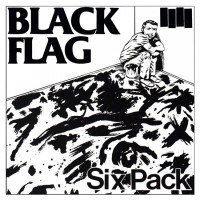 Dez. Greg. Chuck. Robo. They are now considered punk rock icons because of their early involvement in Black Flag. In June of 1981 this line up of the band released their third EP Six Pack. With the renowned Raymond Pettibon artwork for its cover and spanning about five and half minutes long, this 7-inch contained three songs and only one of which that would make it onto the band’s legendary Damaged full length.

It is important to keep in mind the context of the settings in which this EP was released. There is no doubt that in their heyday Black Flag was a major pioneering force in the hardcore genre. They along with a few other bands were the leaders willing to experiment and push boundaries. And all three of the songs on this release had elements of that. The title track had its unmistakable bass intro along with that incredible sudden change of pace in the beginning that comes out of nowhere. The vocal chemistry was also quite amazing, too. Dez Cadena’s lead followed by a wall of gang vocals of “SIX PACK!” in between his lines worked incredibly well. This track along with “I’ve Heard It Before” was also where you could hear early versions of Greg Ginn’s messy-sounding, dissonance-filled guitar solos and fills that he would become known for later on in the band’s career.

The other two tracks on this EP seemed to be left out quite often when Black Flag was discussed typically, but they were great in their own right. “I’ve Heard It Before” was just a bare bones hardcore song filled with frustration in the lyrics, screams from Ginn’s guitar playing and fury from the bass and especially drums. In “American Waste” Dez’s signature raspy voice was truly on display and again you heard another messy-sounding guitar solo from Greg Ginn. Arguably, it seemed to have the catchiest chorus of the three tracks on this release. The way that the guitar riff matched the vocals is really what makes it work damn near flawlessly.

Just under six months later, on December 5, 1981 the band would go on to release Damaged, but with a young Washington DC-based ice cream scooper named Henry Rollins fronting the band with Dez Cadena on backing vocals and rhythm guitar. The title track of this EP, which would also appear on Damaged would become one of the pieces of evidence used to answer the now decades-old question: who is the better vocalist? Dez or Henry? (Or do you prefer Keith or Ron more?)