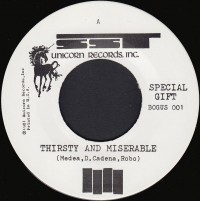 In of itself, the rare “Thirsty and Miserable” 7-inch was more of a footnote in the Black flag catalogue. But, what it suggested by its every being, came to serve of as a cruel tantalization for fans and further underscore how the band’s leader might not be all there.

Released around the time of Damaged in a run of 700 copes directly to the record store Licorice Pizza, “Thirsty and Miserable” served as a promo and “thank you” to fans of the band. Recorded “live” at the famed Target Video, the single serves as the only official live release of the band in its Rollins-era prime.

And what a prime it was. Black flag as a frantic, aggressive five piece is hard to rival and there the band has a wild, spastic energy supplemented by sheer skill and talent. Both the title track and “Life of Pain” feature Black Flag mastering the nihilistic rage and mental breakdown themes that would define their work.

Really, these recordings don’t differ too much from their studio counterparts. And in a way, that just underscores how little studio trickery the band needed and how formidable they were Rollins is still in his younger phase, coming across more of a berserk kid than the Manson referencing ID he’d become later.

The release ended with the last few seconds of “damaged 1” and it acted as a real tease- those few seconds were fierce sounding, yet the band playfully snatched them away. This small act would come to act as a metaphor of how the band was retreated by Ginn in its later years.

There are at least a few unreleased Black Flag studio recordings, including a Rollins version of “Louie Louie” and a different cut of “Rise Above.” The Licorice Pizza tracks are exceptionally rare and who knows how many live recordings there are. On top of that, Black Flag’s catalogue, more than any other punk catalogue, needs remastering.

Yet, Greg Ginn, who appears to own the rights to everything, has stoutly refused to touch the Black flag catalogue in any way except to repress the records every few years in different format sizes. (Does anyone really need a 10-inch version of “Six Pack”?)

Clearly, the fans want both the rare tracks to be released and a remaster job on these records. Certainly, it is in Ginn’s financial interest to reissue these massively influential releases. (And, in a way, isn’t his moral duty, as custodian of these recordings, to have them preserved and archived in the best possible way for future generations?)

Yet, he refuses to do anything with these releases, barely acknowledging these releases, like some neglected child. Perhaps Ginn feels as though he doesn’t want to be defined by his earliest work. That’s understandable, but there is a line that can be walked between focusing on new material and at least paying some service to the classic material (Biafra, Blag, Danzig, and many, many others have all done this with ease and taste).

It used to be that Ginn’s refusal to take care of the Black Flag catalogue seemed almost like pure-punk performance art. “Fuck you for dwelling in the past.” But, as the recent years have shown, maybe it’s no so much about that as it is about jealously towards the band’s other musicians, even when that jealously isn’t required. Trying to diminish the work of Morris, Dukowski, Cadema, Reyes, or Rollins doesn’t make Ginn seem bigger. By, contrast, it makes him that much more pitiful and makes the refusal to re-issue the rare Black flag recordings that much more inexcusable.