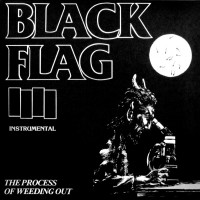 If, by 1985, punk fans were wondering if Black Flag mastermind Gregg Ginn was waging a war against them, the instrumental EP The Process of Weeding Out made the assault as direct as possible. The very back of the release declared (following a semi-cohesive political rant) that “even though this record may communicate certain feelings, emotions, and ideas to some, I have faith that cop-types with their strictly linear minds and stick-to-the-rules mentality don't have the ability to decipher the intuitive contents of this record."

Of course, the double-entendre title, which also saluted Ginn’s other favorite pastime, said as much. So, with the punk scene firmly entrenched with a strict set of rules in the mid ‘80s, Ginn once again tried to upset the form. Weeding Out was composed of four extended instrumentals, each which had an improvisational feel as well as dedication to sound itself. Yet, while the tunes were aggressive and sparse, they were as far from standard hardcore punk as jazz.

“Your last afront” found Ginn wandering up and down the fretboard, more searching for interesting sonic textures than composing songs. And indeed, at points, the song was riveting, with Ginn pulling out metallic, clacking waves that sound more like tractor engines revving than pop music. But, even that song bore the sting that plagues Ginn even to this day. While “Afront,” and the release as a whole, featuring dynamic arrangements which played simplicity against complexity and loudness against quiet, there was a feeling of aimlessness here. Ginn was as much crafting a daring new genre (jazz-punk) as he is simply looking for something to do. Indeed, “Afront” seems to simply end with no real conclusion.

Bassist Kira Roessler and drummer Bill Stevenson, who by that point, had been tuned into Ginn’s stylings for almost two years fit into the groove. But, with Ginn making such a spastic racket, it was hard for either to cut between his barb wire riffage. “Screw the Law” allowed Stevenson to bring his thundering stomp into focus, but with Ginn being so busy, Roessler’s contributions got lost in the mix.

Similarly, on the title track, Ginn wandered around searching for tritones with Roessler’s creeping plucking providing a foil. But, there was so much at play already that when Stevenson entered the scene, the song became a task to untangle chaos instead of a composition.

And in a way, that’s probably what Ginn wanted. Weeding Out’s very purpose was to be extreme and to see who could hang with the most extreme aspect of Black Flag. The fact that the release did more to alienate fans than any previous release really only raises one unanswerable question: did Black Flag fandom’s inability to swing with the extremes show that most people really didn’t get “it,” as Ginn loved to gloat, or was it Ginn who let “it” slip away through laziness and indulgence?

Black Flag: In My Head