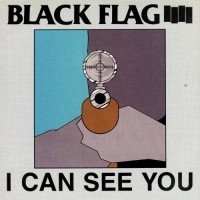 Released as a clearing house release some three years after the band ended, I Can see You was more of a footnote than a turning point for Black Flag. (To be fair, the bland cover, which followed in the stead of some of the most iconic music art-ever, didn't help). Recorded sometime in 1985 with the Roessler/Stevenson lineup, the release exhibited the traits of the band’s near-final period.

The title track was almost experimental in nature, with Rollins dueting off himself in a sing song nature while calling out “Don’t stab me in the back.” It would have added another layer to the release is the band was mocking generic “stabbed in the back” hardcore lyrics, but it was more likely that this was simply Rollins and Ginn at their most self-serious.

Meanwhile, Ginn was full into his dirt-metal mode, opting for huge, off-kilter riffs that that flitted between the catchiness of the band’s early period and more odd-tempo jazz posturing. Each four of these tracks seemed to start and end with the same pressure, never really growing or changing throughout their running- ending simply when the band got bored. “Kickin and stickin” is a hard mashing tune, but even at 83 seconds, it seemed somewhat aimless.

Interestingly, there was a single number credited to only Roesller and Stevenson. “Out of this World” featured wall-sized riffs and tones that frankly could have fit into a mid-period Judas Priest release. It wasn’t at the level of “My War,” but it was exciting to hear Black Flag use what they had once mastered- space. With some room to breathe, Black Flag once again sounded powerful, poignant, and frankly, excited.

Yet, the issue with all four these tracks is that while ambiance, tone, and texture might have been unique, they couldn’t make up for song composition. That’s no sin, especially since this EP was released more or less as a “fans only “ affair. Yet the question remains, if Ginn was willing to release this rarity, why not set free all the lost gems from the classic era?