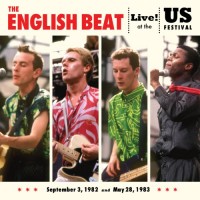 This little ditty of a single is a real treasure. The “English” Beat released their third album Special Beat Service in 1982 and a bit down the line they dropped a 7-inch single for the song “Jeanette”. Accompanying that single on the B-side was the instrumental track “March of the Swivelheads”.  Originally appearing as the song “Rotating Head” on the album, the band decided to change the name and expand upon the song with a longer length and few vocals.

There is a very high chance that you have heard of this song without knowing it. You see, it’s the song played in the conclusion of the film Ferris Bueller's Day Off. Yes, that most famous scene with Ferris running home through people’s backyards, jumping over fences, almost hit by his dad in his car and barely making it back home into bed before he is caught for skipping school.

It has become pop culture concisely and even though the heavy use of nostalgia shoved down our throats happens more and more these days, you cannot deny a good song despite what it accompanies.

A-side track “Jeanette” is a catchy number and besides the Ska element, there is more of a spontaneous dance thing going on. The use of an accordion is a nice welcome and it sorta adds this journey through Paris vibe that sounds weird on paper, but totally works in this song.

Side B is the real winner though. “March of the Swivelheads” is a grower that’s’ both epic and totally on the nose. The instrumental production is unique and each layer from the players take center place only to be switched out with another one then come back altogether into an epic combustion of grooves and Funk. The brass is a highlight, but I gotta give cred to the guitars. Oh, man they are awesome!

There is a smoke filled atmospheric sound of some dank sweaty dance hall swallowed by catchy music, which can make one decide to tolerate the humidity of other people. Suits and hats should be clean just enough!

The sound and overall tone is fun, but with a slight Jazz Fusion thing going on which brings a nice dynamic. Dub is also on display, which is a common element from the band. By the way, if you are interested in this be sure to get the 12-Inch version. Just like the Specials single for their song “Ghost Town”, the 12-inch release allows the songs to have more room to run out and you get more of those sweet precious seconds of a terrific song.

You probably can’t listen to this without thinking of that movie, and that’s ok. It is ingrained in your mind so deep that it’s hard to think of anything else. Still, this is an awesome tune and the English Beat are an amazing band from that certain time and place in music.