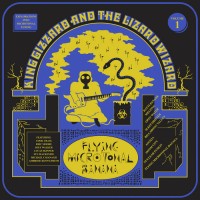 King Gizzard and the Lizard Wizard

I've come to the conclusion that Australia is winning at music right now. Case and point: King Gizzard and the Lizard Wizard. King Gizzard and the Lizard Wizard is a Melbourne psych rock act whose awesome music justifies their awesome name. Seriously, this band is making some of the coolest music out there right now. Hot off their 2016 release, Nonagon Infinity (an album whose final track transitions perfectly into its opener, creating a record that never ends, or, if you will, a nonagon infinity), this is the first of five albums the band is scheduled to release this year. The band plans to devote each album to a different sonic experiment, and, as its title suggests, the featured trait of this album is microtones.

The challenge for King Gizzard and the Lizard Wizard (yes, I’m going to write out their full name every time) seems to be striking a balance resulting in the utilization of this unconventional scale, without inciting dependence on it as a gimmick. In my opinion they pull it off. Each track tends to revolve around one centralized, microtonal riff on top some more typical contemporary bass and drum passages filling in empty space in the base layer. Sure, this could be interpreted as somewhat formulaic on paper, but the components of this formula are so unique that they more than make up for any negativity that such a custom would typically apply. Simply put, if King Gizzard and the Lizard were to concoct these songs with structures any more complex than they are here, it would likely be too much to comprehend at once. The way that these pieces are laid out, encourages the listener to focus their attention on the band’s microtonal exploits.

The opener to Flying Microtonal Banana, “Rattlesnake”, is a perfect entry into the tone that the record takes on. The drum and bass performances are tight, and the lead melody, which the rest of the song revolves around, is a fantastic demonstration of how the band is able to seamlessly incorporate notes outside of the twelve note scale into a melody just as infectious as one crafted with a more typical palate. But “Rattlesnake”’s most glaring weakness is its length. Though this track mesmerized me the first time through it was upon just a second listen that the prolonged periods of microtonal improvisation really started to wear on me. It’s a cool eight-minute experiential piece to kick the record off and introduce its concept, but “Rattlesnake” was a track I found myself straight up skipping in later listens.

The opener, however, does transition very nicely into the second track as it fades away to an atmospheric wind sound effect (which is reused on the closer), perfectly setting the mood for “Melting”. “Melting”’s central riff, which is played over a drum track that sounds like it was straight off of a 90s hip hop track, is just as haunting as it is creative. The band uses the off-putting nature of the microtonal melodies to induce somewhat of an unsettling atmosphere which adds to the track’s overall eerie mood. This track also cross fades into an ambient noise for a drum beat to overlay, which I will say is a cool effect, but tends to be a tad overused by the end of the record with nearly every one of the record’s eight transitions using some sort of fading or crossfading effect to varying degrees.

The next track, “Open Water” is likely the catchiest track here, along with “Nuclear Fusion”. The later of these is definitely Flying Microtonal Banana’s strongest moment and, while it does stick to the overall theme of the record, the microtonal elements of the track would likely go unnoticed without the context of the record. This is also the last track on the album other than the instrumental title track it transitions into (which mainly serves as an atmospheric ourto) and as the last big impression the band makes it's a great note to go out on. If you listen to nothing else from this project, make it “Nuclear Fusion” and “Rattlesnake”: “Rattlesnake” to get a picture of the potential of this unconventional scale, and “Nuclear Fusion” because it's just an incredibly well-written track.

Every track on Flying Microtonal Banana brings something unique to the record; from the beautiful meandering sway of “Sleep Drifter”, to the unsettling minimalism of “Billabong Valley”, to the waxing liveliness of “Anoxia”, to the menacing build into “Nuclear Fusion” of “Doom City”, there doesn’t seem to be any filler tracks, although within tracks, there are certainly filler moments. Some of the improvised pieces overstay their welcomes resulting in an average track length of four and a half minutes. Still, despite these minor faults, Flying Microtonal Banana is a contemporary creative benchmark for music, and while, on paper, that may seem like code for overly artsy and pretentious, every track is genuinely well written and enjoyable regardless of the artistic quirk. Overall, King Gizzard and the Lizard Wizard has put out an album that’s creative, inventive, cohesive, immersive, and, most importantly, I feel cool listening to it.