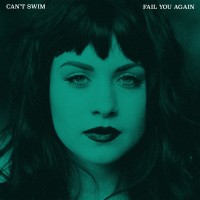 Can't Swim first caught me with "Your Clothes" off last year's Death Deserves A Name EP. I've always been a fan of Pure Noise and this album is a big example why. Fail You Again lives up to expectations set by that little gem, building on their 2015 work, but also smartly taking new turns and twists in terms of poppier and catchier tracks. Last year felt more rugged, but this year, it's all about boasting a more accessible and polished sound that's sure to put them on the map in an even bigger way.

"What's Your Big Idea?" opens up things and it's quite a statement -- one of their most aggressive post-hardcore tracks to date, with layers of grunge a la Balance and Composure. Thick, heavy basslines and sharp, head-banging hooks are what they prided themselves on, but it's nice to see them mix in some lighter aspects of their style. "We Won't Sleep" and "Friend" are great examples of this -- a sharp contrast to say, "Stranger", which feels like it came directly off the old EP. It's tough to classify them based on how they vary their delivery, which was already an issue last time around. A good one to have, nonetheless.

This time, they're much more versed and diversified, expanding their borders in terms of storytelling as well. Chris Loporto's vocals drive the record home, especially on slow melodic burns like "Quitting" and "Molly's Desk", which all pop with a loud bang at the end, signifying what Can't Swim are about. Chaos amid lulls, and painting the personal struggles in life that we burst out of, screaming and alive more than ever.