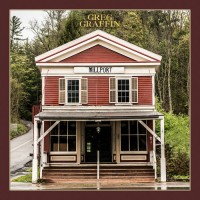 Bad Religion has been a band that has been known, at times, to zig when you expect them to zag. Let’s not forget about their prog-rock style second album that was quickly recalled and remains tragically out of print. Where some punk rockers didn’t finish high school, Bad Religion frontman Greg Graffin earned a Master’s and a PhD while fronting the band, and continues to teach on the side. Technically the last release from Bad Religion was a Christmas album with only one secular song on it, leaving the band that literally named themselves Bad Religion singing all of these religious Christmas tunes. Yes, Bad Religion and Greg Graffin sometimes like to make the unusual choices, so it shouldn’t be that huge of a surprise that Graffin, for his solo material, records country music.

Yes, you read that correctly. You’re not hallucinating. If you’re not familiar with his previous solo material, particularly 2006’s Cold as Clay, you might be surprised to find that Millport is a country album. But where Cold as Clay worked in a little bit of rock into the sound, Millport is just country (except for one song). Not indie-country, not alt-country, not cowpunk. Country. At the same time, though, Millport isn’t the sort of pop-country that’s popular on country radio stations these days like…you know, I just realized I don’t even know enough about country to name a popular country artist right now. Millport is old-fashioned country in its purest form, with a touch of bluegrass thrown in for good measure. And once you’ve recovered from the shock of what the album actually is, it’s actually really good.

“Backroads of My Mind” is a rollicking country opener that makes you want to sit out on the hood of an old Camaro. (That’s a country kind of car, right? I know nothing about country.) “Time of Need” proves that Graffin is just physically incapable of putting out an album that doesn’t trash religion at some point, with its chorus of “No religion can help this time of need,” which ironically has a touch of gospel underneath it. “Sawmill” is one of my favorites with its bluegrass style bringing the album near to its close. And remember when I said that the album is just country with no rock influence with the exception of one song? That one song is the closer, “Waxwings,” which comes off sounding like a combination of country and—I kid you not—Paul McCartney. Every time Graffin launches into the chorus of “Waxwings,” I think he’s about to launch into the chorus of “Maybe I’m Amazed.”

The strangest track on the album is “Lincoln’s Funeral Train,” a song of tribute to Abraham Lincoln. I find it strange that Graffin is neutral to positive about Lincoln. As a man with a political activist with a PhD, I would expect Graffin to know about and bring up the more complicated parts of Lincoln’s legacy like his private racism or the fact that he admitted that preserving the Union was more important to him than ending slavery, and that he would have kept slavery legal had he thought that would better preserve the union. But for once, Graffin doesn’t seem to be looking to make a lot of political statements. Instead, this time around, he seems more interested in painting a portrait of rural living. That’s his prerogative, of course, but in the current political situation, I feel like we really, really need a political Graffin.

Punk fans will have to put aside a lot of prejudices and biases to get to the heart of Millport, but once they do there’s a lot of heart there to discover, not to mention a rustic attitude and some skillful musicianship. Millport is a passion project for Graffin that few punks will take the energy to discover, but they’ll all be missing out on a fantastic project. But one question still remains: if Graffin has the guts to put out a pure country album, how the hell does Into the Unknown remain out of print?