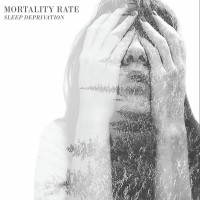 The annual, controversial, and also widely celebrated This Is Hardcore festival announced their 2017 line-up this past week. Below all of the reunions and contemporary hardcore favorites on the poster, somewhere near the bottom in smaller font is where you will find Western Canada’s Mortality Rate. Smaller Canadian bands rarely grace this festival’s line-up, and as far as bands from the Western side of the Country, I think this might be a first for the festival. If I am not mistaken, the number of bands west of Ontario to play TIH could easily be counted on one hand (if on any hands at all). It is always nice to see smaller bands getting their piece of the pie, so naturally I decided to give Mortality Rate’s most recent record Sleep Deprivation a spin.

Sleep Deprivation begins on a rather low note, the title track sort of aimlessly meanders around some atmospheric electronic elements, spoken word and screaming over top of a somewhat interesting drum beat. This opening song left me a bit confused, but not deterred from experiencing the rest of the album. The sound that Mortality Rate are going after seems to be somewhere slapped between metallic hardcore and punk influenced thrash, with a heavy nod to noisy Converge-esque mayhem. The record picks up following “Sleep Deprivation” with “Sandman”, which is a fast hardcore song with some interesting lead work thrown in. Dynamically the album has two modes, fast and heavy, or electronic interlude tracks, that sort of come off as uninspired filler.

There are some serious strong points on Sleep Deprivation that I would love to hear more of. The songs “Plaster” and “Climate Change” feature a lot of fast and engaging guitar work, well executed drumming, and floor clearing breakdowns that are sure to get kids moving. The groove element and the lead guitar work within the songs are a serious stand out in this band, and deserve more of an emphasis on the recording. That being said, as far as musical proficiency is concerned Mortality Rate are killing it. The vocal delivery is somewhat unappealing, most of the lyrics are unintelligible without a lyric sheet, but they are effective in the mix. The vocals remind me of Jacob Bannon’s voice on older Converge recordings, which can be both a blessing and a curse. I love the ferocity of it, the vocalist sounds pissed off, and that is awesome. The only negative being-- that after a while, it gets a little bit grating.

Sleep Deprivation is a debut full length from a promising new hardcore band, there are both strengths and weaknesses present. As far as a cohesive full length, the flow of the album falls a bit flat for me, especially given how short the majority of the tracks are. While some of the songs blend into each other, the stand out tracks can keep this release a float. There is a lot of creativity, energy, and potential here. Mortality Rate are just coming into their own; while they may have stumbled a few times with this release, I think that as they continue to grow and play gigs like Philadelphia’s This Is Hardcore, there are good things to come from them in the future.