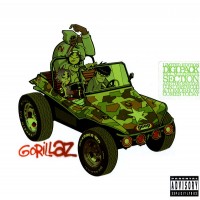 Gorillaz are considered the most successful virtual band according to the Guinness Book of World Records. I guess that is not an exaggeration considering their self-titled debut sold around seven million copies. Release in 2001, Gorrilaz was a strange thing to behold. People didn’t know what to make of it at the time. When the music video for the song “Clint Eastwood” appeared on TV, the fully animated short contained funny characters pretending to make music with, what the heck… is that friggin’ Del the Funky Homosapien rapping? And hey, those characters look a bit like they are from the Tank Girl comic! Huh? And doesn’t that sound sorta like that dude from that band Blur?

The cd was released and sold at an upswing with each single bringing in more fans and the curious folk. Reviews back then were pretty good as well. Now while this album didn’t set the world on fire, and at the time seemed like a short novelty project for both Damon Albarn (Blur / The Good, the Bad & the Queen) and Jamie Hewett (Tank Girl), once they collaborated again on 2005’s Demon Days, the notion that this was all a puff of smoke was quickly vanquished and people finally took Gorillaz serious, even to the point that the band was able to perform live shows.

In concept, this album is neat and all the shared ideas and collaborations give it a fresh feeling even when jamming it today. Compared to the other Gorillaz albums this one probably seems a bit haphazard and not very concise, but that’s what makes it charming.

The genres showcased here are all over the place. Here is a rundown: Reggae, Hip-Hop, Indie, Electronic, Jazz, Rock, Ambient, Trip-Hop, Brit-Pop, Dub, Art Rock, Latin, Psychedelia, and Punk. On the original US release of the cd, there are 19 tracks including a few bonus B-sides and remixes. Out of all contained here, there really isn’t much of a dud. Individually each song shines in its own unique way with lots of quirks and studio tinkering.

Track one, "Re-Hash" starts things off nicely and is one of the more upbeat and “traditional” sounding songs on the entire album. When I first jammed the cd it threw me off because the rest of the album sounds nothing like it. The production on the track has a sort of dirty underground Hip-Hop sound mixed with simple guitar chords that sound like some throwaway indie band wank. That comparison isn’t terrible though because it’s catchy and sounds great. Following next is "5/4" which is almost a Blur song, so if you wanted to listen to Blur then there you go. Damon sounds like he is back in the groove from his old 90’s drugged out Madchester thing. A nice throwback in a way…

“Tomorrow Comes Today” was a song off their debut EP, then re-released on the full length. It’s one of the best songs here, with its slow churned singing from Damon and the simple instrumentals. The overall atmosphere of the track is a bit headier, and there is a hint of a Trip-Hop undertone carried throughout.

Of course, you cannot count out lead single “Clint Eastwood” and the impact it made in the mainstream, but Del the Funky Homosapien makes another appearance on the album in the song “Rock the House”. I consider this the better track because the band was not afraid to go out there and experiment with different sounds. Brass horns are on loop and a sample of "How Many People (Ready to Rock the House?)", by American rapper John Forté is repeated frequently. Del’s rapping is quite good as well, and it is not poetry by any stretch, but his unique voice and vocal approach give the song an immediate relatable quality like this is something you have heard before. There can be history in just hearing someone’s voice, and Del has always been that kind of rapper.

Briefly to touch upon the rest of the album are songs like “Punk” which is a parody of so called “Punk” bands at the time like Green Day and Blink 182. The song sounds like Punk music 101 by way of an Idiots Guide and Damon Albarn sings so incoherently that to this day no one really can figure out the true lyrics to the song. About the only words most can make out fully are “shut up…” Also there is the instrumental  "Double Bass" with some nice grooves present and a bit of Dub influence, and then “19-2000” which has the guitar player Noodle singing the now famous line, “get the cool shoeshine” (minor note, Miho Hatori of Cibo Matto does Noodle’s singing). B-side “Dracula” is awesome to hear and has this Psychedelic tinge that reminds me of watching Hugh Masekela perform “Bajabula Bonke” on the Monterey Pop festival Criterion dvd. Too bad the first Gorillaz song ‘Ghost Train” wasn’t included on this release. Just go check that one out when you get a chance.

Ending the album with the track "M1 A1" was probably the craziest thing I heard on that first time through. What is so crazy about that is the opening sample of some guy yelling “Hello, is anyone there?” That was ripped straight from George Romero’s third Zombie trilogy film Day of the Dead. I laughed at the thought of that obscure portion of the film would be in a song. The track isn’t bad either. The song builds up while the sample is used then explodes with the band going full on rock mode. Nice closer.

So yeah, Gorillaz… Take it for what you will. This was pretty cool when it first hit and stays charming to this day. I cannot comment on the other albums released after the second one, and the fan base seems to have been taken over by Anime fans, so I will probably stay clear of that, but what a debut. Damon Album definitely created something to fall back on!

Dig it perhaps? No worries man…