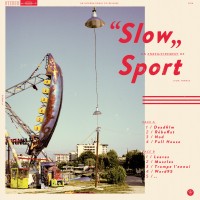 SPORT are an indie-punk band from Lyon that's largely influenced by bands like Sunny Day Real Estate, Mineral, Small Brown Bike, and most of all, American Football. Slow had me looking back into their older material, and it's clear that they've dialed things down, but still sticking to their overall emo aesthetic. This album is a slow burn, moody and melodramatic, playing up the genre of emo and math-rock fully, and while it ends up a bit too much on the homage side of things, it's still a remarkably executed ensemble.

"Deadfilm" and "Muscles" are where SPORTS' strengths are at. Fluid, dynamic and very... well, emo. There's a warmth to how the guitars wrap around each other, and honestly, you can tell they listened a lot to the first American Football album. Most of their music is guitar-driven and less focused on percussive elements, with this album probably being their most tempered and stripped down music to date. "Nod" evokes early-era At The Drive In as well (if you're a fan of Cedric Zavala on songs like "Initiation") and by the time "Word95" helps bookend things, you're enveloped in deep lyrics, and another intimate session from a band that wants to remind us how emo never died. A few of the songs run too repetitive, but overall, Slow is a big step forward.