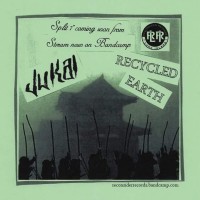 Long Island’s Jukai and Nyack, NY’s Recycled Earth just released a split 7” on the unheralded Reconsider Records. The release itself has a great DIY feel in both layout and music. The bands make sense to share a release as well, as they are similarly heavy hardcore bands.

The Recycled Earth side has two tracks: “Search Party” and “Plan of Salvation.” “Search Party” is the listener’s introduction to Recycled Earth and it leaves a bit to be desired. While the song drips with mosh-heavy brutality, the structure is a bit too chaotic. More cohesion and transitions between the different parts of the song would do well to make it a more palatable track. There are, however, some really well-placed guitar harmonics and choppy riffs that give it enough to listen through. “Plan of Salvation” is a far more organized and compelling song though. There is a good use of negative space by way of feedback, and the guitar and drums carry along much better. Lyrically, “Plan of Salvation” seems to be an indictment or at least a questioning of organized religion, always good fodder in the hardcore world. If this side of the split suggests anything it’s that Recycled Earth have potential. They play heavy dissonant hardcore that doesn’t stray too far in any particular direction, and they certainly have a sound to build on as they grow.

Jukai offer up two songs on their side of the split as well. The opener, “One Life Not Wasted,” straddles the divide between techy metal and hardcore for sure. By not wandering off that line so to speak, the song manages to be really absorbing. The lyrical content only serves to boost that too. The vocalist has a delivery that helps the listener more clearly feel his discontent, drawing on a raspy but impactful scream. Add in lines like “A virtuous man in his grave means more to the world than the scum who walk this earth today (One life not wasted)” and you’re grabbing listeners who appreciate the heavier side of hardcore with some surprisingly insightful angst. “Incarcerate” follows and draws immediate connections to Minnesota’s Harvest, particularly in the guitar work. There is a strong balance of mid and fast tempo as well as savvy guitar layering. This track also brings cohesion to the release as a whole because, similar to Recycled Earth, Jukai too make good use of choppy guitar breaks here.  Jukai are abrasive and jarring, and that sound works for them. The raspy vocals are balanced against more guttural backups, and the lyrics simply work with accessible insight. This is a strong release for a band on the move.

Both Recycled Earth and Jukai seem to be heading towards that next step in their musical evolution, and this release is evidence of that progress. If you like your hardcore heavy with some no-frills beatdown stylings, there are songs for you. If you like a bit more metal and layering in your ears, there are songs for you as well.  The split is a solid DIY hardcore release, no two ways about it.