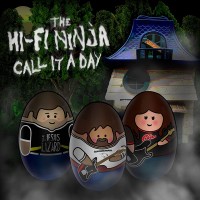 If you are looking for a quick jolt of fun music, you could do a lot worse than The Hi-Fi Ninja’s newest EP, Call It A Day. The band gives us a five-song album that’s a lot of rock, a bit punk, and very enjoyable.

The album starts out fairly straightforward with what is likely the hardest song, “Puncture Wound.” The band doesn’t stray too far from formula here, and the music is fast and fun without being too out of the box. Where this song gets you is lead singer’s Ronnie McCoy’s performance. As with all HFN songs, his vocal stylings are a major component.

From here the musical style begins to calm down a bit, but is no less enjoyable for it. Also, starting with the second song “Fed Up,” we begin to see more intricate compositions for each track. Where the album started rough and tough, it soon evolves into something more technical.

The title track, “Call It A Day,” comes third and marks where this subtle yet noticeable transition is nearly complete. Starting here HFN grabs your attention with an excellent song in the same vein as early Fugazi.

The final two songs keep this same rhythm and feel. The final track, “Ego to Blame,” starts with a catchy slow beat before building energy and strength into a crescendo, which then ends with the same opening beat, albeit a bit more frenetic, up-tempo, and an with accompanying vocal humming that gave me an uncomfortable sensation I could feel deep in my shoulders... a strangely visceral and powerful response.

The Hi-Fi Ninja does a lot of things right on this EP. They don’t really make any major missteps but, then again, there isn’t a lot of major innovation. I really enjoyed this album, but one of the things I couldn’t shake (in a good way) was how I kept feeling that this would’ve fit right in with the heyday of the 80’s DC post-hardcore scene. There’s the obvious Fugazi feel in certain sections of songs, but it also wanted to make me pull out my Dag Nasty, Nation of Ulysses and (a bit?), some Shudder to Think (if only for the naked emotion of the vocals).

The production on the album is just right. I can’t say whether or not it is due to middling production quality (see: budget) or intent, but while the percussion sounds great and crystal clear, the bass guitar sounds just a tad too loud, and the guitars are a bit muddy and fuzzy. But THIS IS A GOOD THING! The sound quality only enhances the performance and the vocals. To be honest, I’d be a bit leery about hearing this band through the lens of an over-produced album (think major label post-“…Clarity” Against Me!).

The Hi-Fi-Ninja may not be for everyone, but if you are into rhythmic songs that can flip on a dime from calm to blisteringly loud and hard, then Call It A Day is definitely worth checking out.