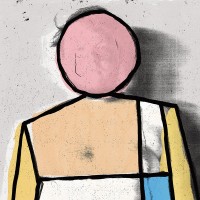 I don’t know if I’m the right person to be reviewing More Scared of You Than You Are of Me. Over the past five years, since my very favorite Australian friend recommended a band then called “Wil Wagner and the Smith Street Band,” I’ve obsessed over and cried to damn near every song created by the Melbourne foursome. It took me four years, three attempts, and over 2000 miles of driving to finally see them live. An emergency caused Wil to miss Fest 13; and while the rest of the band did however perform a song with Jeff Rosenstock and The Bennies frontman Anty Horgan, unique and magical in its own right, it obviously was not the same without Wil. Poetically, I was able to see the full Smith Street Band in my own backyard of Providence, Rhode Island, opening for The Front Bottoms, ending the last night of the tour with a spectacular, running-on-fumes performance. The following month I got a “My Little Sinking Ship” inspired tattoo for my sister, and a few months after that, I got to show it to Wil in Boston (and gave him my Bernie Sanders campaign button to put on his guitar strap, after he jested wanting to steal a lawn sign to bring home) and he responded by saying he’d play the song live for me during their set, and he did, and it was perfect. To say I’m biased and The Smith Street Band has been my favorite band for over half a decade would be an understatement and irresponsible for me to not preface. They mean a lot to me, enough so to subject you all to an introduction of anecdotes; that love for someone’s music is what makes the art so special though, right?

But, hey, objectivity still reigns supreme, this is the first Smith Street release I felt confident reviewing, where the quality of music outshines any subjective expectations and preferences I could have had. More Scared of You Than You Are of Me is beautiful. Emotionally raw, an artistically voyeuristic look into a busy, anxious, depressed, battling, love-struck mind, backed with a constant huge and diverse sound. A punk soul with an explosive, rock and roll exoskeleton.

“Forrest” tears the album open, a raucous, love-starved anthem with ever present, heart throbbing bass guitar work, setting themes of passion and lusting for attention, the desire to be loved, all while trying to overcome the mental shadow casting self-loathing and insecurity. There is a certain level of self awareness on tracks like “Song for You,” where Wagner confesses, “the realization shatters through me, that I'm the villain in this movie, but I've got no script and no direction, I just want you to let me love you,” the result being not one of pity, but an acceptance, “one day there'll be a song a for you, one day there'll be a song about you,” regardless if things work out or not. This admittance of emotional fragility coupled with immense adoration is exemplified on “Passiona,” as delicate guitar strokes saunter behind another revelation, “and I'm absolutely infinitely more scared of you than you are of me, and I've always been the one who cares too much,” but instead of shame, a certain level of appreciation and confidence rises with upbeat indie rock riffing.

Chasing of cheerful energy is supplied in the crowd pleasing single “Death to the Lads,” with a tremendous hook and killer guitar solo, it is the catchiest, stand out rock track of the bunch. “Shine” is the closest thing you’ll get to a song off the prior, all conquering Don’t Fuck With Our Dreams EP, the ultimate feel-good song, accompanied by choir-like backing vocals, the life-affirming chorus, “down here in the flight path, we do our best to keep our heads up,” will give even the most nihilist of punks goosebumps.

Existential dread is prevalent on “Run into the World” (which has terrific guest vocals by Laura Stevenson and Tim Rogers, too), “It Kills Me to be Alive,” and “25.” This group of songs showcases mental intensity, while remaining musically and vocally subdued with a slower pace and stray dizzy sounds; reflecting on difficulties of growing older, and how hard it is to feel alone, even while surrounded by people, travelling all around the world. This is also where the basic need for all encompassing love far surpasses romantic love; trying to find yourself and a purpose while rolling through the punches of life. More searching mentally than sadness emotionally.

The final quarter to the album is a bit of tension release. The hard rocking off “Suffer” hammers and stomps the whole way through, a lot of cathartic destruction and a repeated venting declaration, “you’re the worst thing that ever happened to me.” “Young Once” is a winding, climbing 5 minute excursion, lifted by hair band-worthy wailing guitars and heaving drum fills, surveyed by reminiscent vocals. “Laughing (Or Pretending to Laugh)” closes things out, and resolution is cut short, the tape begins to sputter, just as things seemed to start making sense. That’s life.

More Scared of You Than You Are of Me is yet another sign of The Smith Street Band’s growth musically, lyrically, and mentally; Pool House Record’s proud maiden voyage. To mirror one’s music and current state of life is the band’s strong suit, and always has been, walking the line of personal and approachable, with an effort to relate, but still feel individual. And it doesn’t hurt to have Jeff Rosenstock and Jack Shirley wondrously overseeing your work, either. More Scared of You Than You Are of Me proves the trajectory of life isn’t easy, hell, for some it almost never is, but if The Smith Street Band have made one thing clear, “we’re all in this shit fight together.”